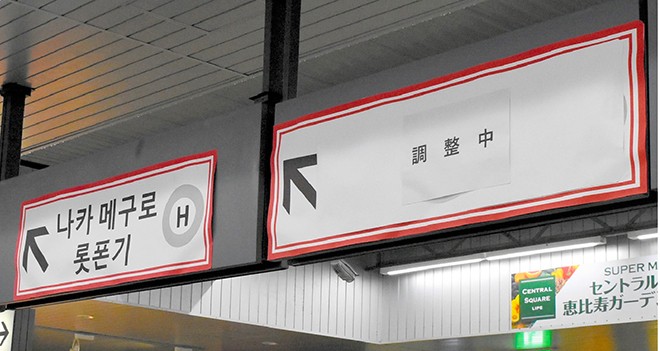 “Under adjustment” appears on a piece of paper covering a sign written in Russian at JR Ebisu Station in Tokyo’s Shibuya Ward on April 14. (Takashi Ogawa)

East Japan Railway Co. (JR East) on April 15 removed a sheet of paper covering a station sign written in Russian that had offended passers-by angry about the country’s invasion of Ukraine.

The company “has reached a conclusion that it is appropriate to undo the (action),” a JR East official said on April 14.

Signs written in Japanese, English, Korean and Russian appear inside a ticket gate area at Ebisu Station in Tokyo’s Shibuya Ward. They direct passengers to platforms on the Hibiya subway line for trains going toward either Roppongi or Naka-Meguro stations.

But multiple passengers and others told JR East that they were offended by the Cyrillic sign.

The company on April 7 covered that sign with a piece of white paper that said “under adjustment.”

However, JR East came under fire on social media for that action.

Kyoko Abe, who runs World Open Heart, a nonprofit organization that studies issues of discrimination, said, “Eliminating only the Russian sign constitutes discrimination and passive hate in terms of results.”

She said: “Since Russia launched the invasion of Ukraine, peer pressure has increasingly made it socially acceptable to bash anything related to Russia, and businesses have overreacted, too.

“We need to broaden the understanding that discriminating against Russians living in Japan will not lead to an end to the war.”

Many of JR East’s foreign language signs are in Chinese, Korean and English.

The company said it installed the Russian sign at the station because the Russian Embassy is located along the Hibiya Line and many passengers have asked how to get there.

JR East said another reason it covered only the Russian sign was “because the number of foreign passengers has declined under the COVID-19 pandemic, and there have been fewer inquiries about the Russian Embassy.”

(This article was written by Takashi Ogawa, Yosuke Watanabe and Midori Iki.)