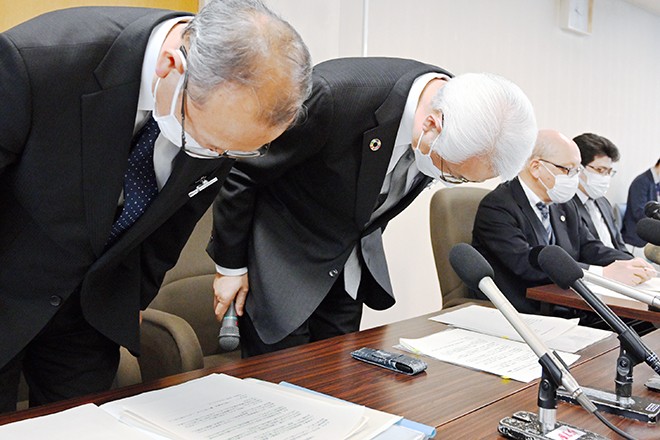 Shinichi Kurowarabi, second from left, the chairman of the Asahikawa education board, apologizes to the dead girl’s mother at an April 15 news conference in Asahikawa, Hokkaido. (Kengo Hiyoshi)

ASAHIKAWA, Hokkaido--A third party committee investigating suspicions of bullying at a junior high school in this northern Japan city concluded that a 14-year-old girl found frozen to death had been subjected to gross acts of harassment by older students.

Saaya Hirose was found dead from exposure in March 2021 after confiding in a friend she wanted to die. The second-year junior high school student went missing the previous month.

The committee set up by the local education board said in an interim report released April 15 that acts of bullying occurred between April and June 2019, shortly after Hirose entered junior high school.

Hirose’s mother repeatedly asked school officials to intervene, but the interim report said the education board never bothered to mount a thorough investigation.

Shinichi Kurowarabi, the chairman of the Asahikawa education board, attended the April 15 news conference held by committee members and apologized to the girl’s bereaved family.

Kurowarabi also admitted that the education board knew about most of the bullying incidents described in the interim report.

The committee will try to determine why the junior high school and education board initially did not recognize any bullying had taken place. A final report expected to be released in August will include measures aimed at preventing a recurrence.

Hirose’s mother released a statement April 15 that said she had wished the education board had recognized the bullying much earlier.

Lawyers for the bereaved family held a separate news conference and criticized the committee for only questioning the mother on one occasion and for not asking her whether she realized bullying was the cause of her daughter’s misery.

The interim report said seven older students were involved in the bullying that included getting Hirose to send videos of a sexual nature as well as touching her body while repeatedly talking about sexual topics.

In her statement, Hirose’s mother wrote: “I witnessed my daughter suffering for a long time. She suffered until right before she died. I cannot stop crying when I recall how much she suffered at that time. I wish they had recognized bullying at that time.”

On June 22, 2019, Hirose jumped into a river in an attempted suicide while two of those who bullied her looked on. After that incident, she moved to another junior high school in the city, but stopped attending classes. She posted on social media that she was a victim of bullying.

Kazuo Takeuchi, an associate professor of student guidance at the University of Hyogo, said Hirose might have been helped if local officials had recognized the bullying when it first started.

He also noted that the harassment took place over the internet.

“There is no clear way to prevent such acts, so the school may not have been able to respond appropriately,” Takeuchi said. “Swift action is needed to establish a guidance structure to deal with such deplorable acts.”