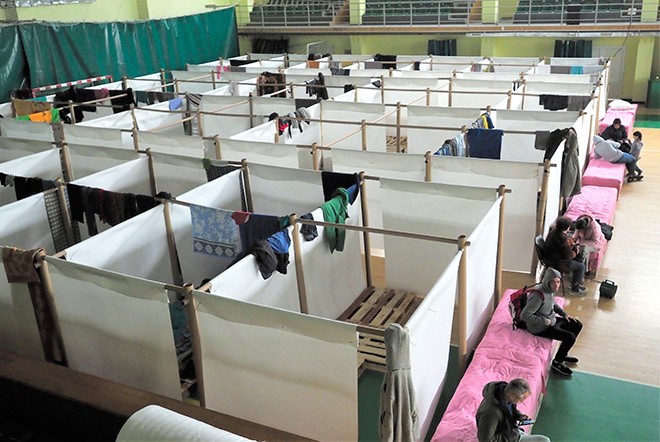 A shelter in Lviv in western Ukraine on April 5 is lined with partitions that consist of recycled cardboard tubes and fabric to give evacueees some privacy. (Jun Nojima)

The partitions, cardboard tubes that serve as pillars and beams to drape curtains to create units that measure roughly 2 meters by 2 meters, offer privacy, which until now had been a commodity in short supply.

Ban, who in 2014 won the Pritzker Architecture Prize, the most prestigious award in modern architecture, specializes in recycled cardboard tubes to quickly and efficiently house disaster victims.

In early April, a gymnasium in the southern part of Lviv, a western Ukrainian city, was divided into spaces for about 120 people to rest. Once they were set up, dozens of evacuees moved from one space to another to cheer up friends and others in distress.

Haperska Oksana, 39, moved into the gym with her daughters Nastja, 15, and Carolina, 6, after they fled Kharkiv in northeastern Ukraine in early March, and ended up sharing the same space with a 19-year-old individual they met during their evacuation.

Haperska said there was no privacy when they initially sought shelter at a school, but are now reasonably comfortable because of the partitions.

Her 30-year-old husband, whom she remarried, remained in Kharkiv to fight, she added.

With Kharkiv increasingly coming under intense attack from Russian forces, Haperska said she was unsure when she and her daughters could leave the shelter.

Despite the grim look on her face, she expressed gratitude for the efforts made to make their stay as relaxed and comfortable as possible.

Before the partitions were erected in the gym in mid-March, the evacueees had to make do with only mattresses and blankets spread out on the floor.

Mykhailo Shevchenko, 30, an architect helping out as a volunteer at the shelter, said he was surprised that such a simple arrangement could provide so much privacy. He called it a great idea.

The partition project started after Ban, 64, learned that Ukrainian evacuees were forced to sleep on the floor in shelters across the country and elsewhere. He told Hubert Trammer, a Polish architect and longtime friend, about his idea of setting up the partitions.

The partition system was initially set up in a shelter in eastern Poland, with Trammer’s help.

The Polish architect also contacted an architectural firm in Kharkiv where Shevchenko works, which led to the partition system being introduced to shelters in Ukraine.

Although Shevchenko, who hails from Kyiv, said he wanted to see his family and relatives in the capital, he decided to remain in Lviv for the time being because there were so many things to attend to.

He said partitions have already been installed in five or so shelters in Lviv.

Shevchenko said he wanted to introduce the system at at least 10 locations in Lviv and elsewhere.

When asked about his future plans, he said he wanted to use his skills as an architect to help reconstruct Ukrainian towns that now lie in ruins.