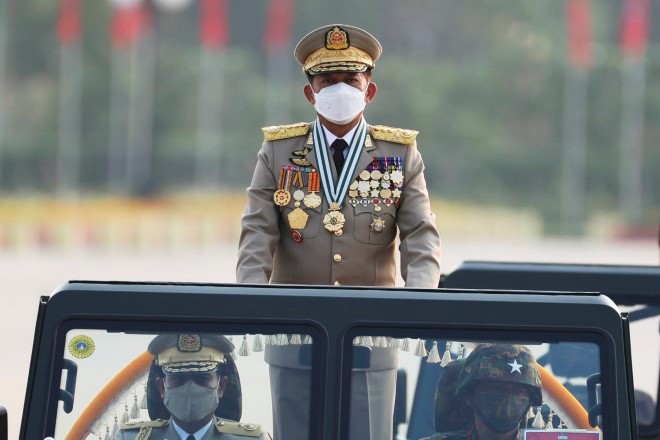 BANGKOK--Myanmar’s military government on Sunday began releasing more than 1,600 prisoners to mark the traditional new year holiday, but they didn’t include any political detainees despite the country’s ruling general vowing to bring peace this year.

Myanmar has been under military rule since February last year, when the army ousted the elected government of Aung San Suu Kyi. The takeover was met with massive resistance, which has since turned into what some U.N. experts have characterized as civil war.

This year’s holiday celebrations, carried out over several days, were muted as opponents of military rule called for a boycott of government-supported activities.

State-run MRTV television reported that the head of Myanmar’s military council, Senior Gen. Min Aung Hlaing, had pardoned 1,619 prisoners, including 42 foreigners who will be deported.

Mass prisoner releases are common on major holidays. The spokesman of Myanmar’s Prison Department, Khin Shwe, told The Associated Press that those released were mostly drug offenders and common criminals, and that he was unaware if any political prisoners were among them.

An official from Yangon’s Insein Prison said 160 people have been released from the penitentiary but they didn’t include those convicted of political offenses.

Tun Kyi, a senior member of the Former Political Prisoners Society, said that political detainees are held as hostages by Min Aung Hlaing. He said it was not surprising if political prisoners were not released, because the general sees people who oppose his government as criminals and intends to crush them.

“He knows the political prisoners will oppose him again if they were released,” he said, adding that they were also kept to be used as bargaining chips who can be freed as a gesture of goodwill to appease other countries and groups critical of the military government.

The Assistance Association for Political Prisoners said Friday that 10,238 people, including Suu Kyi, are in detention. The group keeps detailed tallies of arrests and killings linked to the government’s repression.

Min Aung Hlaing said in his new year’s speech that he is doing the best to bring peace in 2022. He said that he will try to achieve his two national goals--prosperity and an abundance of food and provisions. Myanmar is one of Asia’s poorer nations and living standards have slipped due to the coronavirus pandemic and the political turmoil.

Myanmar’s military has been carrying out full-scale offensives against militias and ethnic rebel groups in the countryside as well as urban guerrillas active in the cities.

The opponents have established their own parallel shadow government. Its acting president said in his new year speech that the militias and allied armed forces of ethnic minorities control the country’s rural areas.

“I’m happy to report to you on this auspicious Myanmar New Year that our resistance forces and ethnic armed forces are now controlling much of the country, particularly rural areas, as well as positions around several major cities,” Duwa Lashi La, acting president of the self-styled National Unity Government, said Saturday. A video of his speech was posted on Facebook.

It is impossible to confirm either side’s claims of control over territory. Even though the resistance forces do not hold any areas, the repeated major offensives by the army indicate security problems in many areas.