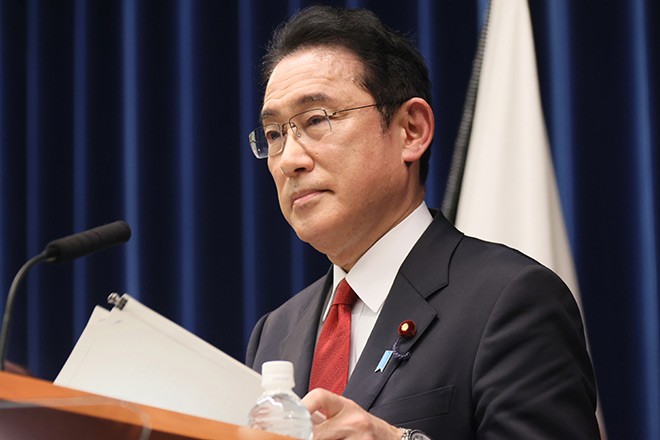 More than 80 percent of respondents in all age groups approved of Kishida’s comment. Males and females were equally supportive of the remark.

Even among people who disapprove of Kishida’s Cabinet, 85 percent endorsed his “war crimes” assessment.

Only 8 percent of all respondents said they did not support the comment.

The nationwide telephone survey was conducted on randomly selected eligible voters on April 16 and 17.

The results showed the approval rating for the Kishida Cabinet reached 55 percent, the highest since the administration was formed in October last year.

The previous high was 50 percent in the March survey.

At the same time, the disapproval rate for the Cabinet increased to 29 percent in the latest survey from 25 percent in March.

Sixty percent of respondents highly rated Kishida’s response to Russia’s invasion of Ukraine, up from 52 percent, while 28 percent gave him low marks, compared with 26 percent in the previous survey.

Sixty-eight percent of respondents in the latest survey feel that the economic sanctions imposed against Russia should continue despite their impact on the Japanese economy. That was up slightly from 67 percent in the March survey.

More than half of respondents in all age groups were in favor of the continuation of the sanctions. The rate among male respondents was 74 percent, compared with 61 percent among females.

Although the effects of the sanctions are starting to be felt in Japan, such as higher oil prices, only 23 percent of those surveyed felt that the sanctions should be lifted.

On domestic issues, 53 percent of respondents said they highly rated the government’s response to the COVID-19 pandemic, a slight increase from 51 percent in March. Forty-two percent gave the government a failing grade, up from 35 percent in the March survey.

As for Kishida, 54 percent of respondents said he has not shown leadership in dealing with the pandemic, compared with 38 percent who said he has.

In addition, more people disapproved of the prime minister’s handling of price increases caused by the weaker yen and more expensive natural resources.

The respondents were nearly evenly split on whether revitalizing the economy or preventing novel coronavirus infections should be the top priority of the government.

Among the 2,099 calls to mobile phones of eligible voters, 43 percent, or 903, gave valid responses.