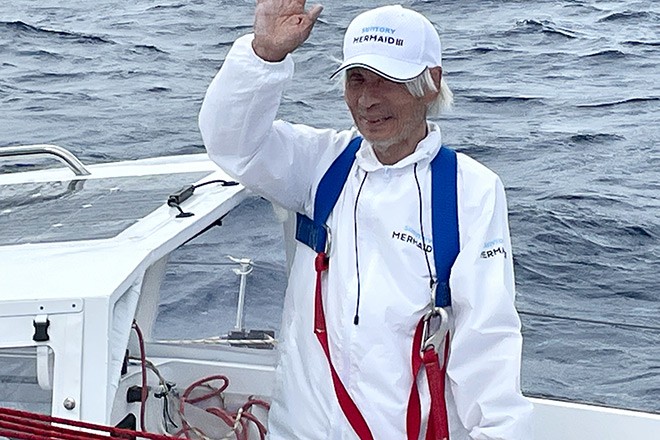 Kenichi Horie waves on his yacht, Suntory Mermaid III, as he sails off Honolulu. (© Kenichi Horie)

HAWAII--Octogenarian Kenichi Horie, who aims to become the oldest solo voyager to cross the Pacific, passed Hawaii on April 17, a week ahead of schedule and apparently in good shape and spirit.

When support staff went out in waters off Honolulu to take images of Horie, 83, they called out “Take care!” He replied, “Thank you!” and he waved to them. The veteran adventurer looked as usual, according to the staff.

Horie set out from San Francisco on March 26 local time on the Suntory Mermaid III, a new yacht measuring 19 feet (about 5.8 meters) from bow to stern.

The vessel was the same size as the one on which he pulled off his first solo voyage across the Pacific--from Nishinomiya Port in Hyogo Prefecture to San Francisco--60 years ago.

The yachtsman from Ashiya, Hyogo Prefecture, dictates descriptions of his voyage to his staff via a satellite phone, who then publish the travel logs on his website.

According to the logs, after leaving San Francisco, he was soon hit by a storm.

“March 27: Soon after putting to sea, I was baptized by the storm,” it said. “Winds and rains are both getting weaker now, but they will continue until the next morning, according to a weather forecast. It is rough!! But I just need to endure.”

His sailing after the storm went smooth. But it is still difficult for him to send messages from his smartphone while on a pitching vessel.

“March 29: The cabin is tight and rolling. It was exacting to tap out a text message on my smartphone under the circumstances. It felt like having seasickness.”

Although Horie carries a satellite phone, communicating with others through a ham radio remains one of his favorite pastimes.

“March 31: I spotted a tanker on the sea’s horizon this morning for the first time since I set out. The vessel was traveling eastward. Tomorrow, I am going to use the ham radio.”

Amateur radio fans across Japan tried to communicate with Horie on April 1, with some setting up large antennas. But they could not reach him due to the poor conditions for radio wave transmission.

The following day, some could.

Eleven days after his departure, he sailed south to a location near 26 degrees north, almost the same latitude as Okinawa’s main island.

The temperature was 20 degrees where he was sailing.

“April 6: I want to take a shower, by which I mean scoop up seawater with a bucket and pour it over my head. Just washing my head with seawater soap must be refreshing. But it is still a little chilly. I should wait a few more days.”

Horie wrote he has a sufficient stockpile of food and water.

Horie has a little more than 6,000 kilometers to go before arriving at Nishinomiya Port in early June.