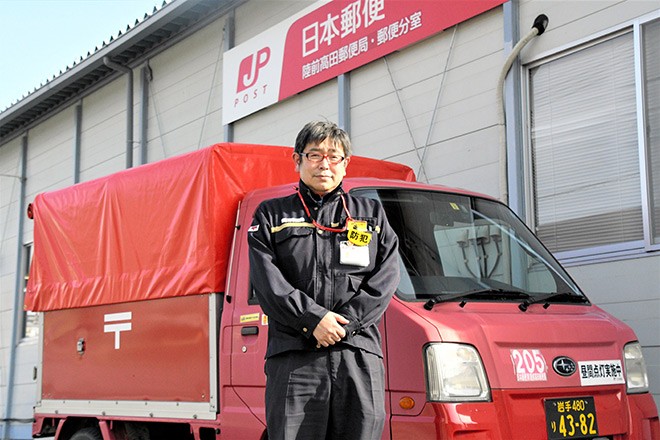 RIKUZENTAKATA, Iwate Prefecture--Postal carrier Koyo Funano was preparing for his route at the Rikuzentakata Post Office parking lot close to the coastline here when the Great East Japan Earthquake struck in 2011.

He drove to higher ground after hearing firefighters shouting, “Evacuate!” from the loudspeaker of a fire truck.

Seeing a black cloud of dust engulfing the familiar city, Funano, 48, feared it would swallow him, too.

Several days after he returned to his home in neighboring Ofunato city, he heard that the post office would partially resume operations at a local community center. The post office building had been destroyed by the tsunami spawned by the quake on March 11, 2011.

“After the disaster, I became more determined than ever to deliver the mail, no matter what,” he said.

Although the post office lost some workers in the earthquake and tsunami, it resumed delivering mail on March 18, a week after the disaster. Whenever he found mail from mailboxes swept away by the tsunami, Funano would collect it.

“I will always remember many of my colleagues who died in the disaster and do my best to continue carrying out my and their duties,” he said.

But he had no idea where to deliver such mail since the tsunami reduced the central part of Rikuzentakata to ruins.

Funano, therefore, visited evacuation centers and asked evacuees whether there were people there to whom his mail was addressed. He couldn’t locate them sometimes, but he said he was motivated by the smiles the recipients showed when they saw the names of the senders.

“I wanted to do whatever I could to deliver the feelings and words of the senders, especially when mobile phone service was disrupted,” Funano said.

The Rikuzentakata Post Office resumed services at a temporary building in late April 2011, becoming the first post office to do so in the three hardest-hit prefectures of Iwate, Miyagi and Fukushima.

About six months later, the post office constructed another temporary building to continue delivering the mail.

The post office began operating in a new building roughly 11 years after the disaster, on April 18.

“I feel we can finally ‘return to normal,’” Funano said.

He has been working as a postal carrier for most of his roughly 20-year career at the post office.

The main building was rebuilt 11 years after the disaster because the post office had to look for a new plot of land.

Many post offices in the Tohoku area were damaged in the tsunami and also adversely affected by the Fukushima No. 1 nuclear power plant accident triggered by the 2011 earthquake.

According to Japan Post Co.’s Tohoku regional office, 132 post offices in the Tohoku region were temporarily closed after they were hit by the tsunami.

Of these, the Rikuzentakata Post Office and 106 others, excluding one closed for good, resumed operations.

The nuclear accident forced 27 post offices to temporarily shut down.

One of these, the Okuma Post Office in Okuma, Fukushima Prefecture, resumed operations on April 11 after relocation, but 15 post offices, situated mainly within a “difficult-to-return” zone, have yet to reopen.