TASTE OF LIFE/ Stir-fry of bamboo shoot and pickled ‘takana’ green: Dish passed on from mother to daughter who shared hardships 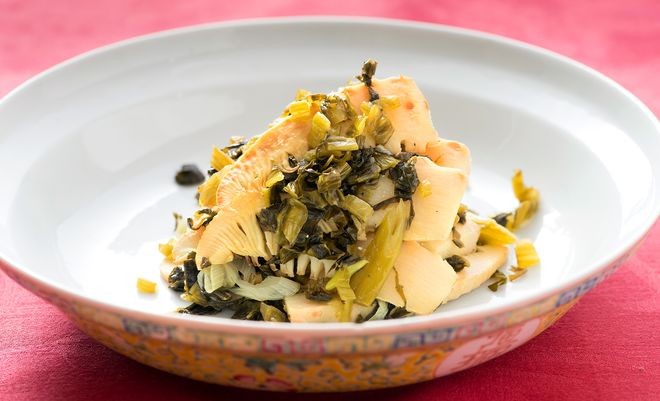 Chinese home cooking that Wu Wen makes reflects the flavor she inherited from her mother.

A sociable and cheerful person who was also good at cooking, Wu’s mother would often make a stir-fry of boiled bamboo shoot and pickled “takana” mustard green. It appeared on the dinner table so often that Wu called it the “most typical pre-prepared dish” in her household.

China was caught in the whirlwind of the Cultural Revolution from the 1960s through the 1970s. Both her parents were meteorologists, and young Wu was sent down with her mother as part of the rustication program and moved from one farm village to another.

She could not study in a stable environment and was lonely at school where she was called the “daughter of bad people.” Her mother also had difficulty doing farm work that she was unaccustomed to. Yet when she got home, her mother would go to the kitchen, saying, “Let’s fix something and eat.”

It was a difficult period for the family including her father who remained in Beijing as the head of a meteorological observatory.

Fast forward five decades and Wu faced the COVID-19 pandemic in Tokyo. Meeting people became a “risk” and she had to temporarily close her cooking salon. Now that she has reopened it, she takes careful infection prevention measures.

In this age of the coronavirus, Wu says she thinks of her 87-year-old mother who still lives in Beijing. Having gone through hardships with her mother in the farm villages, she feels that “things will be all right once we ride out” the crisis.

“Things you never thought of can happen and things don’t go as planned. But they are part of the joy of living. The pandemic won't last forever. A new future will be waiting if we endure it some way. Perhaps I am happy-go-lucky or maybe it is my nature,” says Wu.

From her mother, she has inherited not only home cooking like the stir-fry of bamboo shoot and pickled takana, but also the disposition to look ahead.

Even pickled takana that has turned sour will taste good after it is stir-fried in oil. It is a dish that goes well with rice.

Wu Wen: Born in Beijing in 1963, she came to Japan in 1990 and opened a cooking salon in Tokyo in 1997. Her recent book focusing on stir-fry dishes titled “Wu Wen no itamemono” was published by Takahashi Shoten on April 9.

3. Pour sake and stir-fry to cook out water content. Sprinkle salt and pepper in the end to taste.

About 130 kcal and 1.8 grams salt per portion
(Nutrient calculation by the Nutrition Clinic of Kagawa Nutrition University)