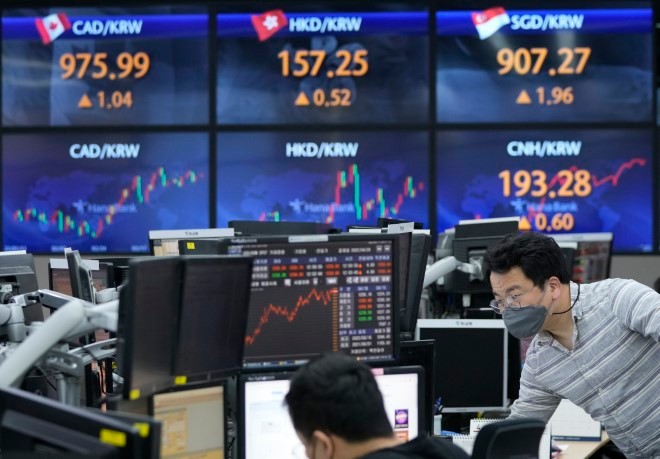 BANGKOK--Shares were mostly lower in Asia after China reported Monday that its economy expanded at a 4.8 percent annual pace in January-March.

China’s growth has fallen well below the official target of 5.5 percent for 2022. In quarterly terms the economy grew 1.3 percent in the first quarter, compared with 1.4 percent in the last quarter of 2021.

Authorities have ordered shutdowns in some major cities including Shanghai to battle the country's worst outbreaks of coronavirus since it flared into a pandemic in March 2020. But the biggest impact of the shutdowns will likely be seen in the current quarter.

“Lockdowns are going to affect data for the whole of April, and maybe even longer as more cities are also adopting measures to bring COVID under control,” ING Economics researchers said in a note.

Bangkok and most other regional markets declined, while Jakarta was higher.

As trading resumes Monday in many world markets, attention is focused on Ukraine, where Ukrainian fighters were holding out against a capture of their shattered city of Mariupol after a 7-week siege, ignoring a surrender-or-die ultimatum from Russia.

The fall of Mariupol would be Moscow’s biggest victory of the war and free up troops to take part in a potentially climactic battle for control of Ukraine’s industrial east.

Ukraine was sending top officials to Washington for this week’s spring meetings of the International Monetary Fund and the World Bank amid dire warnings about the impact of the Russian invasion on the global economy.

A World Bank official said Friday that Ukraine’s prime minister, finance minister and central bank governor are coming. The official spoke on condition of anonymity because the visit had not been officially announced.

The conflict has pushed prices for oil and other commodities sharply higher, compounding difficulties for policy makers trying to nurse along recoveries from the pandemic while also tamping down inflation that is at 40-year highs in many countries.

Central banks are raising interest rates that had stayed at record low levels to counter the devastation of the pandemic to help rein in price increases. But that can also discourage a revival in spending and investment needed to drive recoveries.

“This morning another rise in oil prices is likely to fuel inflation fears, and rate hike jitters around the meaningful Fed action required to snuff those fears out,” Stephen Innes of SPI Asset Management said in a commentary.

U.S. benchmark crude oil gained 92 cents to $107.87 per barrel in electronic trading on the New York Mercantile Exchange. It rose $2.70 to $106.95 per barrel on Thursday, before closing for Good Friday.

Brent crude, the basis for pricing international oils rose 99 cents to $112.69 per barrel.