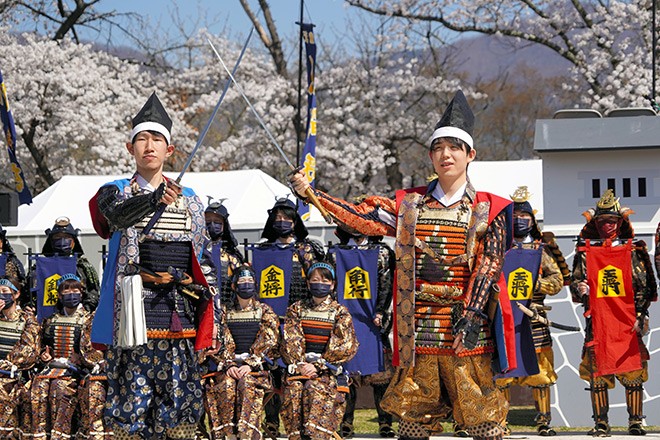 Shogi prodigy Sota Fujii, right, and his 6-dan opponent, Daichi Sasaki, pose for a photo after their match in Tendo, Yamagata Prefecture, on April 17. (Shigetaka Kodama)

TENDO, Yamagata Prefecture--Shogi prodigy Sota Fujii proved that his mastery over the Japanese board game extends even when the pieces become life-size and he's dressed up as a warlord.

The 19-year-old superstar threw himself into the role in his first “ningen shogi” (human shogi) game using humans as "koma" pieces on a massive outdoor board here on April 17.

More than 1,000 spectators, including those at a public viewing venue, got excited as Fujii spoke like a samurai.

“I would like to thank you for inviting me to Tendo,” he said.

Wearing a "jinbaori" surcoat, he appeared at the venue for the ningen shogi, which was surrounded by cherry blossoms in full bloom in Tendo.

The board for the ningen shogi measured about 17 meters long and 14 meters wide. Two opposing "generals" commanded armies of the 40 human koma, who were wearing "kacchu," or traditional Japanese armor.

Fujii drew laughter from the audience when he asked for advice from his opponent, Daichi Sasaki, 26, a 6-dan player, on his next move, although the outcome of the game was never in doubt.

“I enjoyed it very much as the weather was fine and cherry blossoms were in full bloom,” Fujii said after winning the match.

Fujii became the youngest player ever to clinch five major professional titles in shogi in February.

The shogi tradition that uses human pieces started in 1956 in Tendo, where koma production is the highest among all municipalities in Japan. The annual event was held for the first time in three years due to the novel coronavirus pandemic.

The organizer asked fans to apply in advance for viewing this year’s game to cap the number of spectators as a precaution against the virus. It said it received about 18 times as many applications as the number of seats available.