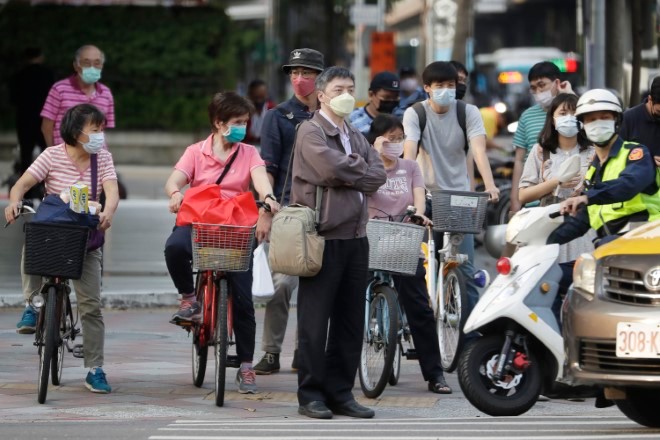 People wearing face masks to protect against the spread of the coronavirus wait to cross a street in Taipei on April 13. (AP Photo)

TAIPEI--Talks on Taiwan buying the child version of the Pfizer/BioNTech COVID-19 vaccine have stalled as Pfizer does not have the right to sell it and BioNTech and its Chinese partner do not make it, a Taiwanese minister said on Monday.

The sales rights for the vaccine in Greater China, including Taiwan, belong to BioNTech and its Chinese sales agent, Shanghai Fosun Pharmaceutical Group. A deal for the main version of the vaccine ran aground last year after Taiwan accused China of political interference, which Beijing denied.

The vaccines were later purchased after Taiwan’s government allowed chipmaker TSMC, a Buddhist charity and Terry Gou, the billionaire founder of Apple Inc. supplier Foxconn, to buy them on the government’s behalf.

Taiwan Health Minister Chen Shih-chung said the problem now was that only Pfizer makes the version of the shot for children, but it does not have the right to sell it to Taiwan, which lies with BioNTech and Fosun.

“Pfizer makes and bottles the smaller child version of the vaccine. BioNTech does not have this delivery method,” Chen told reporters.

“But Pfizer does not have the sales rights for China, Hong Kong, Macau and Taiwan. So that has complicated the contract.”

Chen said he did not see “outside interference” in the talks, and that the government was trying to come up with a contract with all parties involved.

Speaking earlier at parliament, Chen said the talks had been going on for more than two months.

Taiwan on Sunday authorized the Moderna Inc COVID vaccine for children aged 6 to 11.

Taiwan is dealing with a spike in domestic COVID cases with more than 10,000 infections since the beginning of the year, though more than 99 percent have either no symptoms or mild infections, and only two people have died.

More than half the population of 23 million have received three vaccine doses, and the government is working on a plan to live with COVID after more than two years of effectively closing its borders.