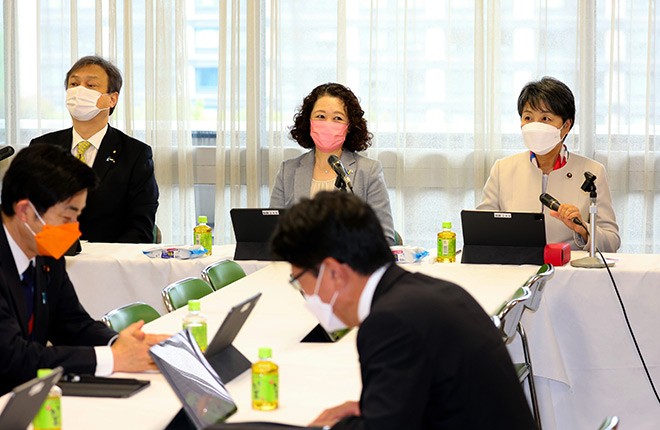 The topics included gender wage disparity, the prevalence of women in irregular jobs, and helping people who care for children or elderly family members to continue working.

LDP officials asked Yoshino to exchange views at the gathering with party lawmakers.

“We wanted individuals who have not had the opportunity to directly present their views to appear at our meeting,” said Yoko Kamikawa, who chairs the LDP strategy headquarters, after the session.

Yoshino downplayed the unusual nature of a top Rengo official attending an LDP gathering, noting that one of her predecessors, Nobuaki Koga, once attended a party session.

LDP Vice President Taro Aso, however, said in a speech in Fukuoka on April 17 that the ruling party and Rengo are in an increasingly close relationship.

He said not only were labor union officials giving speeches at LDP headquarters, but the relationship had developed into one in which the two sides wined and dined together as well.

“As a result, Rengo no longer only supports CDP candidates (in national elections),” Aso said.

(This article was written by Yuta Kayaba and Takero Yamazaki.)