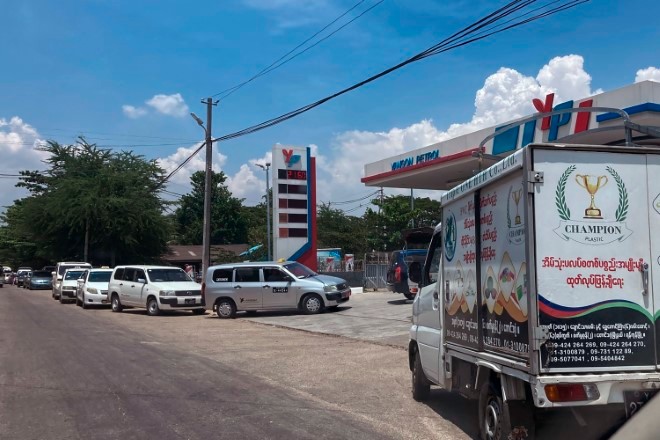 BANGKOK--Myanmar’s military government denied Tuesday that the country is suffering from a shortage of fuel after rumors about low supplies of gasoline and diesel led to panic buying and long queues at service stations in several cities.

The Ministry of Electricity and Energy denied there was a shortage, saying unfounded rumors and inadequate infrastructure for retail sales were to blame.

The ministry said in a statement sent to journalists that Myanmar has sufficient supplies both in storage tanks and in two unloaded vessels berthed at the main port for Yangon, the country’s biggest city.

The ministry said it was working to ease panic buying and that retail sales would continue as usual.

An executive of a private fuel company based in Yangon suggested the panic buying was partly due to an April 5 notice by the central bank ordering businesses and individuals to convert dollars and other foreign currency into kyats within one day or face legal consequences. The conversions would be made the official exchange rate of 1,850 kyats per dollar, less that the prevailing black-market rate of 2,030 kyats per dollar. It also said that foreign currency could only be sent overseas with government approval.

The order suggested that the authorities may be running short of hard currency needed to pay debts and purchase key supplies such as oil, gas and weapons.

Myanmar has suffered a cash crunch since the army seized power last year, ousting the elected government of Aung San Suu Kyi and triggering financial sanctions by Western governments. The economy, already suffering from the coronavirus pandemic, has been strained further by public resistance to the army’s takeover, which has led to what some U.N. experts have characterized as a civil war.

The fuel company executive said gasoline distribution companies were having a hard time buying from foreign companies under the new regulations, even though tankers holding the fuel they want to buy have been docked at Yangon for a week. He spoke on condition of anonymity because his remarks critical of government policy could get him into trouble.

The central bank has yet to decide on quotas for selling dollars to importers, causing the distributors to delay their purchases, he said.

“The main problem is that it doesn’t have a stable and specific policy for the payment system for our importers to purchase imported fuel. The central bank has not yet come up with a clear policy on how to sell dollars to us,” he said.

Fuel was not being transferred from ships to replenish storage tanks because payments haven’t been made, he said.

The spokesperson for Myanmar’s ruling military council, Maj. Gen. Zaw Min, told MRTV state television that some companies were spreading rumors about a fuel shortage because they did not want to trade at the dollar rate fixed by the central bank.

Zaw Min accused Myanmar media outlets operating in exile, who generally oppose the military government, of causing problems. Dollars will be sold starting Wednesday to those qualified to purchase them, he said.