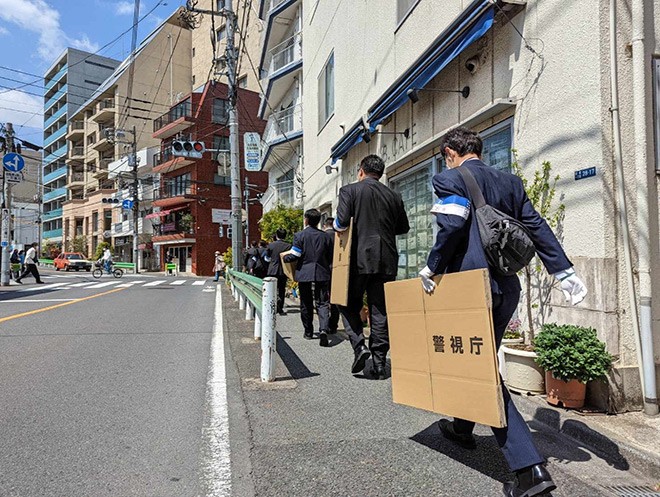 Investigators search an office of an organization that operates YamatoQ, a conspiracy-minded anti-vaccine group, in Tokyo’s Minato Ward on April 9. (Shingo Tsuru)

Tokyo police arrested the leader of the conspiracy-minded anti-vaccine YamatoQ group on April 20 on suspicion of unlawful entry into a vaccination clinic in Shibuya Ward.

The Metropolitan Police Department said a 43-year-old former actor intruded into and disrupted a clinic, a COVID-19 vaccination site, on the morning of April 7.

Twelve members of YamatoQ, which reportedly calls itself the Japanese arm of U.S. conspiracy cult QAnon and has been waging a campaign against the COVID-19 vaccine rollout, barged into the clinic the same morning to protest the vaccinations.

Police arrested four of them on the spot.

Investigators later found out that the man had trespassed into the clinic before the arrests were made.

Police on April 9 searched an office in Minato Ward of an organization that runs YamatoQ.

The man serves as an executive of the organization. Police believe the man led the intrusion.

Police have declined to reveal if the man has admitted to the charge or not.

The man formerly worked as an actor, starring mainly in movies of a genre called “V cinema.”

According to an investigative source, YamatoQ has used social media to actively spread information about the group’s activities.

On March 15, the group protested against the vaccine at Tokyo Dome in Bunkyo Ward, a vaccination site.

The members filmed their actions in yelling at police officers and posted a video on social media.

It says, for example, that “the coronavirus itself does not exist,” “the vaccinations are part of plans to decrease the population” and “the vaccine contains an infection source, a seed of a disease that generates a harmful effect on the body.”