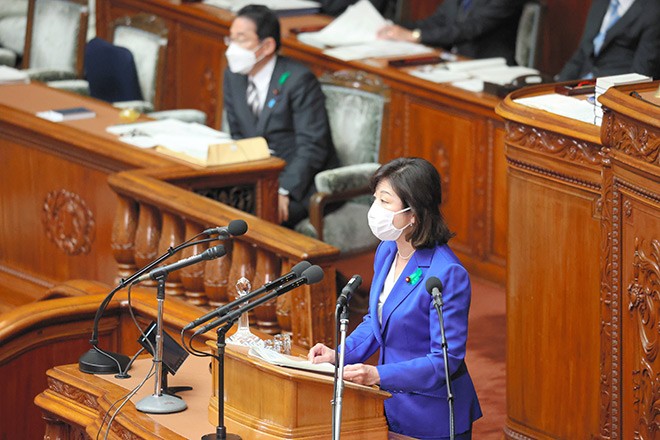 Seiko Noda, the state minister in charge of children's policy, explains the contents of legislation to establish an agency for children and families at the April 19 Lower House plenary session. (Koichi Ueda)

Diet deliberations began April 19 on legislation to establish a new agency for children and families, although there was little in the way of new policy ideas included in the bills.

The agency’s formulation has been one of the main issues advocated by Prime Minister Fumio Kishida’s administration.

However, the lack of new measures may be a blessing in disguise as it means the government will not be pressed to find new revenue sources to pay for those programs.

The agency was initially touted as being a new “command center” that would look at the various issues from the perspective of children and tear down the traditional bureaucratic barriers that have existed with different ministries handling various problems related to children.

But the government decided to pass on tackling a major hurdle that left kindergartens and day care centers, which essentially look after children of the same age, under the jurisdiction of different ministries.

The new agency, scheduled to be established in April 2023, would take over issues from the welfare ministry and Cabinet Office, such as child abuse prevention and paying child allowances.

However, the education ministry will still maintain jurisdiction over kindergartens, schools and bullying problems.

Opposition lawmakers on April 19 said the Kishida administration had failed to address the stovepipe nature of the bureaucracy.

Sachiko Horiba of Nippon Ishin (Japan Innovation Party) said expectations that problems related to the stovepipe bureaucracy would be overcome “had been betrayed.”

As late as March, a high-ranking official of the Cabinet Office admitted it was still formulating new policy measures for the agency for children and families.

One of the few new programs included in the legislation was consideration for establishing a system that would prohibit convicted child sex offenders from working in day care centers or as teachers.

(This article was written by Yuta Ogi, Taro Kotegawa and Ryuichi Hisanaga.)