DPP allies with Nippon Ishin, not CDP, for Diet election in Kyoto 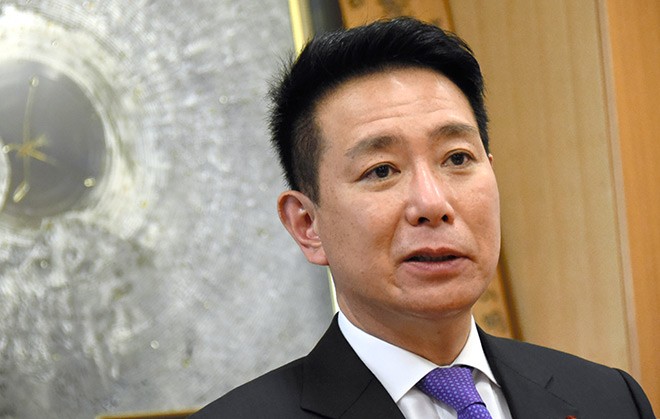 Seiji Maehara, the election strategy chief of the Democratic Party for the People, on March 23 (Tamiyuki Kihara)

The Democratic Party for the People has dealt a blow to the united-opposition strategy of long-time ally the Constitutional Democratic Party of Japan ahead of this summer’s Upper House election.

A DPP executive said the party decided on April 19 to rally behind Yuko Kusui, a rookie candidate fielded by Nippon Ishin no Kai (Japan Innovation Party) who will run for a Diet seat from the Kyoto electoral district.

The DPP was expected to make an official decision at a joint meeting of its Upper and Lower House members on April 20.

The CDP is seeking to gain cooperation from the DPP and other opposition parties in uniting behind single candidates in the summer election to improve their chances of defeating rivals from the ruling coalition of the Liberal Democratic Party and Komeito.

Tetsuro Fukuyama, a former secretary-general of the CDP, also plans to run in the election from the same Kyoto district, where two seats will be contested.

Seiji Maehara, the DPP’s election strategy chief, was elected to the Lower House from the Kyoto No. 2 district. He has been deepening his ties with Nippon Ishin and seeking to form an alliance with the Osaka-based party to unify candidates in the Kyoto district for the Upper House election.

The DPP is also coordinating with Nippon Ishin to gain its backing for a DPP-backed independent candidate running in the election from the Shizuoka district.

Rengo (Japanese Trade Union Confederation), the main support group of the DPP and the CDP, has said it will back Fukuyama in the summer election.

The DPP’s decision to rally behind Kusui will likely make it more difficult for the two parties to cooperate in the election.