Famed ‘sakura tunnel’ in Fukushima at risk of dying out 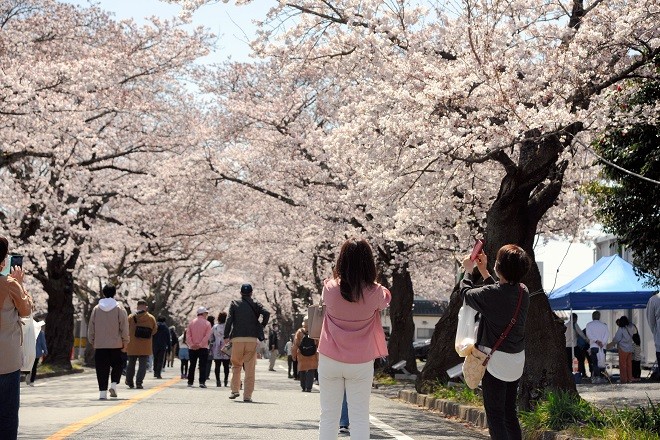 The “sakura tunnel” street in the Yonomori district of Tomioka, Fukushima Prefecture, attracts many visitors on April 9. (Tetsuya Kasai)

TOMIOKA, Fukushima Prefecture--The entire “sakura tunnel” formed by cherry trees here was open to visitors for the first time since the nuclear disaster unfolded nearby in 2011.

The crowds of cherry-blossom viewers were a positive sign for Tomioka officials, who are looking to use the sakura-filled Yonomori district as the core sightseeing base for recovery from the 2011 disaster.

But experts have noticed something seriously wrong with the trees.

Maintenance work for the trees, including branch thinning and pest control, had been carried out by Tomioka town officials and volunteers.

However, that work was halted for years because the entire town had to evacuate following the triple meltdown at the Fukushima No. 1 nuclear plant triggered by the 2011 Great East Japan Earthquake and tsunami.

A recent analysis of cherry trees along the “tunnel” street and in a nearby park found many had been severely damaged by bugs and infected with witches’ broom, a disease known as the trees’ worst enemy.

Toshiyuki Suzuki, secretary-general of the Fukushima prefectural branch of the Japan Tree Doctors Association, who has been examining cherry trees in Tomioka for decades, said many of them will die within a decade if nothing is done.

“They are in a critical situation,” Suzuki said. “It is already too late to treat many of the trees. As things stand now, the landscape cannot be preserved.”

He also noted that the trees comprising the sakura tunnel were planted so close together that they are also likely suffering from serious root rot.

The town last autumn set up an expert panel to devise countermeasures.

“Residents pride themselves on the street lined with cherry trees,” said a town representative. “We will make efforts from now to conserve them for the next 20 to 30 years.”

Under the plan, protection steps will be taken for rescuable trees, while impossible-to-save ones will be replaced.

The cherry trees along the L-shaped street east of JR Yonomori Station were first planted about 120 years ago by immigrants.

Students of elementary and junior high schools in the area later installed Yoshino cherry trees on both sides of the 2.2-kilometer road. Those trees now number 420.

Before the 2011 disaster, the Tomioka spring festival attracted many sightseers from in and outside Fukushima Prefecture for “hanami” flower viewing.

To make the tourist spot more appealing, local volunteers organized a cloth dyeing session using the sprigs and held a letter writing contest on the theme of cherry blossoms.

TOWN OPENING UP AFTER EVACUATION

The evacuation order for the town was partially lifted in 2017. A 300-meter section of the street was made accessible at that time because the town government wanted to use cherry trees as a tourism resource.

In 2020, the entry ban was removed for a 500-meter area by the street in a “difficult-to-return zone” that had been heavily polluted by radioactive substances. The restrictions for the remaining part of the zone were eased in January this year.

The evacuation order for designated reconstruction bases, where intensive decontamination work has been conducted in difficult-to-return zones, is expected to be lifted in spring 2023.