Analysis: Why N. Korea is siding with Moscow on Ukraine invasion 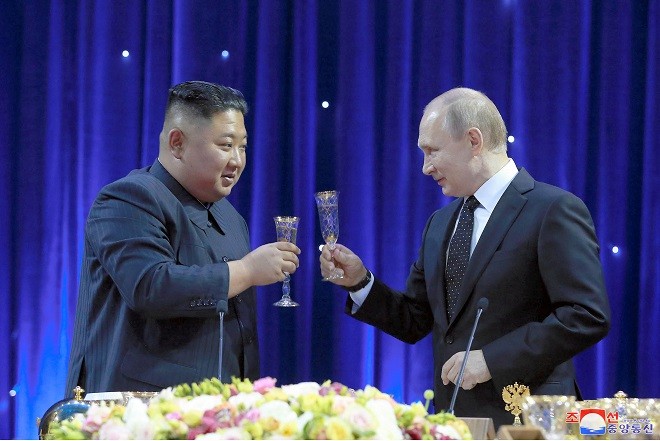 North Korea, a nation long on the outs with most of the international community, has found in the Ukraine conflict a chance to breathe new life into its old, somewhat soured relationship with Russia.

The North was among the five nations that opposed a resolution condemning Russia for its invasion of Ukraine during an emergency special meeting in March of the 193-member U.N. General Assembly. China, which is North Korea's closest ally, notably abstained.

The North’s support for Moscow came despite the fact that Russian President Vladimir Putin has been recently treating Pyongyang coldly.

Insiders are split on why exactly North Korea is backing the move now, with some suggesting the regime is extending an olive branch to Russia after decades of failure at seeking certain key favors.

But according to a defector, it has more to do with maintaining a consistent narrative domestically about the West. The defector said the reclusive state’s leader, Kim Jong Un, needed to stick to the “fabricated story” he has been using to persuade his own citizens of threats from the United States and its allies.

North Korea used to have a much closer relationship with Russia.

The country was even founded with the help of the former Soviet Union. Under the leadership of Kim Il Sung, the state ravaged by the 1950-1953 Korean War was rebuilt thanks to Soviet aid.

Accounts by North Korean defectors reveal that apartments in Pyongyang were outfitted with the Russian-style stove called the “pechka,” not its Korean counterpart, the “ondol,” until the 1960s, when Kim Il Sung applied the “juche” (self-reliance) ideology to architecture.

Around that time, Kim Il Sung is said to have lamented before his close aides that “all products in our nation, down to every single screw, are made in the Soviet Union.”

When Nikita Khrushchev criticized Josef Stalin in the 1960s, officials removed the portrait of Stalin shown in the central part of Pyongyang. As North Korea pushed to become more self-reliant, it also removed an image of Vladimir Lenin from the capital in the 1970s.

Despite the deviation in political stances, the Soviet Union continued to provide support for North Korea, such as through nuclear and missile development and other forms of military cooperation, as well as energy resource exports made at friendly prices.

A confidential agreement let high-ranking officials from North Korea receive advanced medical treatments free of charge that were difficult to obtain in their home country.

But the close relationship between the communist regimes suddenly changed at the end of the Cold War.

Nearly all the economic assistance programs were halted following the 1991 collapse of the Soviet Union. The only offering that remained was part of humanitarian activities: an annual export of 10,000 tons of flour.

The Treaty of Friendship, Cooperation and Mutual Assistance between the two nations expired in 1996, under which the Soviet Union was mandated to defend North Korea in an emergency.

The defense obligation was not included in the Good-Neighborly Friendship and Cooperation Treaty signed in 2000 by Pyongyang and Moscow.

Fifty scientists who lost jobs in Russia and Ukraine were recruited by Pyongyang on favorable terms after the 1991 collapse of the Soviet Union. Their relocations were unofficial and done on an individual basis.

Since the Korean Peninsula’s nuclear crisis in the 1990s, the Russian government has continued to refuse to send its military support to Pyongyang. One Russian government insider was heard complaining at the time, “We have created such a terrible state.”

The North has repeatedly run up against walls seeking help from Russia.

Kim Jong Il asked Moscow for Russian-made fighter jets. But Russia had arranged a tour of a helicopter plant in Ulan-Ude, suggesting it could provide choppers for civilian use, though it had no plans to give out fighter aircraft.

Another source said Defense Minister Hyon Yong Chol was sent by Kim Jong Un as a special envoy to Russia in April 2015.

Hyon requested Moscow to allow Pyongyang to purchase its S-300 missile system for air defense and help the North design a nuclear submarine. Russia did not pledge cooperation.

In April 2019, Kim Jong Un and Putin held a summit in Vladivostok in the Russian Far East.

The atmosphere was tense. Kim Jong Un had just been thrown into a difficult situation after negotiations broke down at a Washington-Pyongyang summit in Hanoi in February the same year.

According to a source familiar with the inner workings of Russian and North Korean politics, Putin started the meeting with a surprising remark.

“I was told by Washington to be sure to tell Mr. Kim Jong Un that the United States will unwaveringly commit itself to final, fully verified denuclearization,” Putin was quoted as saying by the source. “North Korea should pay attention to this stance.”

Kim Jong Un shot back that Washington was trying to “fully disarm us with no benefits in return.”

He then went on to say, “We will never be deceived. I beg President Putin to explain our view to President Trump.”

In response, Putin only said Russia was “in favor of dialogue” between the United States and North Korea over the nuclear issue, and that “six-party talks should be arranged” to resolve the problem.

At the meeting, Kim Jong Un asked for Putin’s cooperation in relaxing sanctions on Pyongyang. He also demanded Russia accept laborers from North Korea and import a greater amount of seafood and minerals.

But Putin maintained that those products were not in short supply in Russia. He reportedly vowed to “positively consider” taking in North Korean workers. Putin did not mention military collaboration.

And the welcoming ceremony for Kim Jong Un was unusual. It was not held in the formal reception hall but in an open space in front of Vladivostok Station. Putin left Vladivostok before Kim Jong Un departed for North Korea.

“It goes against diplomatic protocol,” the insider said. “I watched a video of the welcoming event and found a passer-by walking behind Mr. Kim Jong Un. I was amazed at how coldly Russia had handled North Korea.”

But now, there is an opportunity for that relationship to thaw.

As tensions grow among Russia and NATO members in Europe, not to mention those between China and the United States, flanked by Japan and Australia, Moscow has gradually been softening its attitude toward Pyongyang.

Russia and China in 2019 presented a draft U.N. resolution to ease sanctions on the North. An anti-sanction draft resolution was also submitted in November last year, calling for the lifting of import restrictions on petroleum products.

A Japanese government source surmised that North Korea voted against the resolution chastising Russia for going to war with Ukraine because it is “attempting to make Russia feel indebted to it at a time when Moscow is most troubled.”

“The North may expect Russia will veto a sanctions resolution imposed on North Korea after ICBM (intercontinental ballistic missile) launches and other events,” the source suggested.

An ex-diplomat fleeing from North Korea presented a different view, noting the latest move appears designed for domestic consumption rather than aimed at furthering diplomacy.

The former diplomat said Pyongyang had adopted a general strategy of siding with winning parties in votes at international meetings up until the 1990s. The North was vying to join the United Nations before the South, so it wanted to gain support from as many countries as possible.

“The homeland once ordered an abstention in a case where it was not possible to predict which side would win.”

The ex-diplomat pointed out Pyongyang supported the obvious loser in the case of the Ukraine resolution because North Korea sees the conflict as “one involving Russia and Western nations, not a dispute between Russia and Ukraine.”

“Authorities (in the North) have been stubbornly insisting to citizens that its nuclear tests and ballistic missile launches aim to prevent a possible invasion by the United States,” the defector said. “Unless it backs Russia this time, it would face a self-contradiction. It appears to have tried to retain its conventional strategy--stir up a fight with Washington--rather than criticize Ukraine.”

In any case, it is shoring up its allies.

On March 5, North Korea launched yet another one of its ballistic missiles. The U.N. Security Council on March 7 held its fifth meeting in 2022 to discuss Pyongyang’s missile launches. But a statement condemning them could not be produced due to objections from Russia and China.

(This article appeared on The Asahi Shimbun's GLOBE+ website on March 11.)