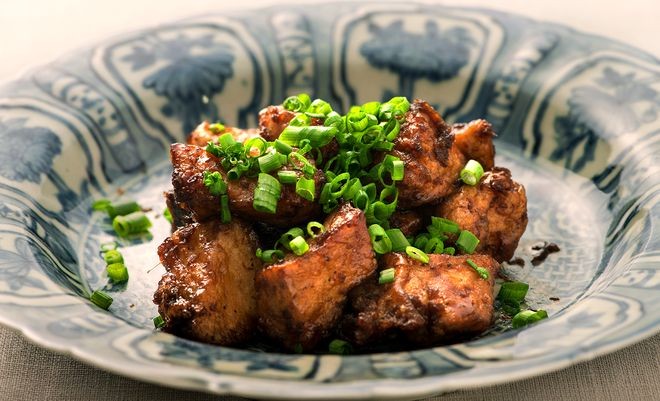 Before Wu Wen first set foot in Japan in 1990, her job in China involved supporting foreign companies doing business in the country there.

She became acquainted with people working for Japanese companies, leading to her decision to come to Japan.

Wu married a Japanese man--her parents flew from Beijing to attend the wedding and stayed for a while in Tokyo.

Each time her mother went to the supermarket in Tokyo, she would buy fish and cooked this week’s stir-fry of white fish with sweet vinegar “to her heart's content.”

The dish, known as “tang cu yu” (sweet and sour fish) in Chinese, is a specialty of Hangzhou, Zhejiang province, close to the hometown of Wu’s father.

It was his favorite dish, and when the family was living in Beijing, her mother would buy freshwater fish such as carp or grass carp to make it.

Looking back, Wu says cooking fish with so many bones must have been time-consuming.

She also remembers her mother being excited while walking through the fish section of supermarkets in Japan.

“In Japan, even fish have their seasons and come in a variety. They are also sold as fillets. Although my mother didn’t say anything, it must have been a cultural shock for her. Japan is a fish paradise,” says Wu.

“This is a precious meal in life,” her mother often said.

Since the meal in front of us is a once-in-a-lifetime affair that can never be replicated exactly the same way again, the phrase means we should treasure each meal.

Wu's mother loved to cook and did not mind going a long way to buy the ingredients she wanted.

Wu also cooks the ingredients in the spirit of “ichi-go-ichi-e” (to treasure every encounter) and tries to draw out the best in them.

The sweet vinegar flavor goes well with a light-tasting white fish. It is the perfect choice to be served on the dinner table or in bento boxed lunches during the coming season.

Wu Wen: She is a cooking expert who was born in Beijing in 1963. She came to Japan in 1990 and opened her cooking salon in Tokyo in 1997. Her recent book focusing on stir-fry dishes, “Wu Wen no itamemono,” was published by Takahashi Shoten.

1. Cut white fish into bite-size pieces, mix with base seasoning for fish and leave for 20 minutes. Dust with katakuriko starch right before frying.

4. Serve and sprinkle with green onion.

About 360 kcal and 2.2 grams salt per portion
(Nutrient calculation by the Nutrition Clinic of Kagawa Nutrition University)

The mixed seasoning creates the sweet and sour taste and should be brought to a boil and simmered before adding the fried fish and coating them with the sauce.

By adding the fish after the sauce is boiled down somewhat, the dish will be less likely to turn out sticky.

This column, translated from The Asahi Shimbun’s Jinsei Reshipi (Life Recipe) column, will appear on Thursdays from May 5.