Gion Festival parade to return to Kyoto after two-year hiatus 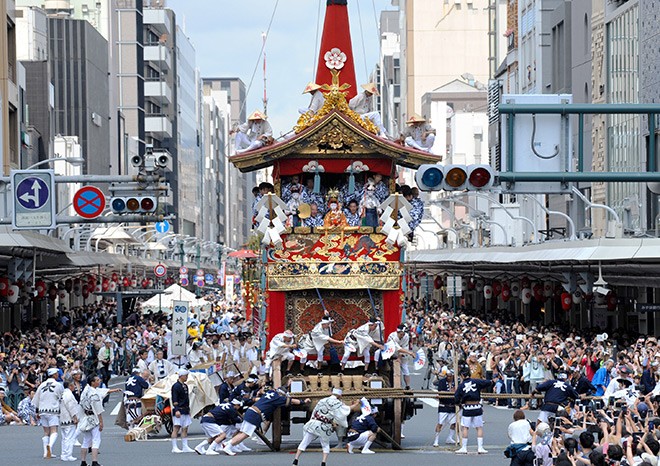 A parade of massive floats called "Yamahoko Junko" is held in the streets of Kyoto as part of the annual Gion Festival in July 2019. (Asahi Shimbun file photo)

KYOTO--For the first time in three years, the grand spectacle of the massive parade of floats called "Yamahoko Junko" will be seen passing through the downtown streets here in the annual Gion Festival in July.

The parade’s organizer, the Gion Festival Yamahoko Association, based in Kyoto’s Nakagyo Ward, made the decision on April 20 at a meeting with 34 local float-preservation associations.

The Yamahoko Junko was canceled in the past two years due to the COVID-19 pandemic.

However, the association had thought that it would become difficult to pass down the traditional skills required to assemble the giant floats with ropes and to move them around if it was called off again this year.

“It’s important to inherit the festival and to pass it down to future generations," said Ikujiro Kimura, chairman of the association. "This year, we would like to cheer people up by holding celebrations to drive away the pandemic.”

The Gion Festival, one of the three largest festivals in Japan, features various events during the month of July.

The Yamahoko Junko is the highlight of the festivities, in which the procession of floats attracts a massive throng of spectators in the city center.

A float called Taka-yama, which was removed from the parade after being damaged by a rainstorm in the 19th century, will return to the celebration after about 200 years.

The Gion Festival Yamahoko Association expects that more than 1 million spectators will come during the Saki Matsuri, the Ato Matsuri and the Yoiyama (festival eve) period.

The decision to hold the Yamahoko Junko this year was partly driven by the lifting of the COVID-19 pre-emergency measures that were in place in 18 prefectures including Kyoto until March 21.

The Yamahoko Junko was canceled in 2020 for the first time in 58 years to prevent the spread of the novel coronavirus. The last time it was canceled was in 1962, when it was called off due to construction of the Hankyu railway line.

It had not been canceled for two years in row since the wartime period of 1943 to 1946.

Last year, even though the parade wasn’t held, float-preservation associations assembled 17 floats on streets to maintain their float-building craftsmanship skills.

However, the Gion Festival Yamahoko Association called on tourists and spectators to refrain from watching the assembling process to prevent the spread of COVID-19.

(This article was written by Kensaku Nishida and Yukiko Kitamura.)