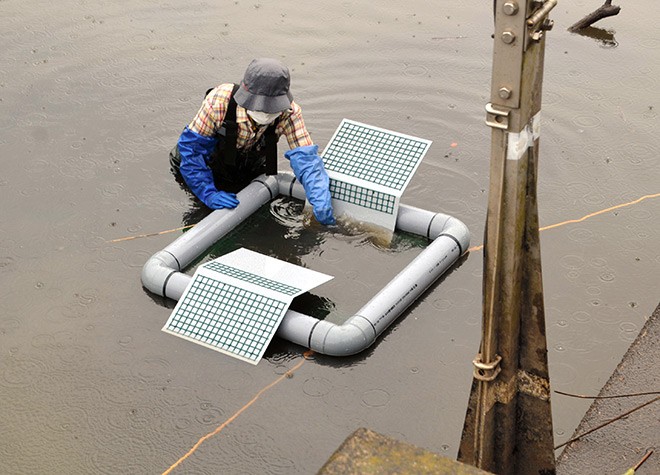 A turtle trap is set at a regulating reservoir near Runway A at Narita Airport on April 20. (Hiroyuki Kamisawa)

NARITA, Chiba Prefecture--Areas near the runways at Narita International Airport will soon be full of turtle traps to eradicate the pesky reptile, which poses a danger to aircraft.

Airport staff showed news media on April 20 how the traps are set.

Narita International Airport Corp. set up four handmade traps on the day at a regulating reservoir about 150 meters from the runway.

The 1-meter-square traps made of pipes with a deep net in the middle were set on the water.

If a turtle climbs up a slope the trap has on two sides, the turtle’s weight will make the slope lean inward, and the turtle will fall into the net.

Narita Airport officials are expected to set up basket-shaped baited traps, too, and immerse them underwater.

The company will also set up U-shaped gutters at four locations between the runway and the reservoir, over a distance of one kilometer, so the turtles will fall into them and be trapped.

A pilot about to take off saw the turtle and reported it as an emergency.

The runway was shut down for about 10 minutes.

A red-eared slider, about 30 centimeters long, was caught.

Narita International Airport Corp. is working to tackle the problem in cooperation with experts as part of security measures for aircraft because if a turtle gets sucked into a plane’s engine, it can cause a serious accident.

There have been nine cases since fiscal 2013 in which a turtle was seen or caught near the runway, according to the company.

Many of the incidents occurred on the north side of Runway A.

The company decided it was too difficult to find how the turtles were accessing the runway.

Therefore, it has decided to set up about 140 traps at a regulating reservoir near Runway A, where turtles live, as well as at discharge channels and four ponds around the airport.

Tomomi Kataoka, who chairs the nonprofit Seitai Koubou and has worked on the measures at Narita Airport, said the reservoir “provides food and good egg-laying sites, the perfect environment for turtles.”

Although the exact number of turtles living at and around the airport remains unknown, the company has estimated there are possibly several hundreds of them.

Red-eared sliders are non-native species indigenous to North America. They were imported as pets starting in the late 1950s.

However, more and more are being found in the wild.

The invasive species has reportedly caused damage to domestic species and the agricultural and fishery industries.

The Environment Ministry and others have designated the turtle as a threat to the ecological system and said active control is needed.