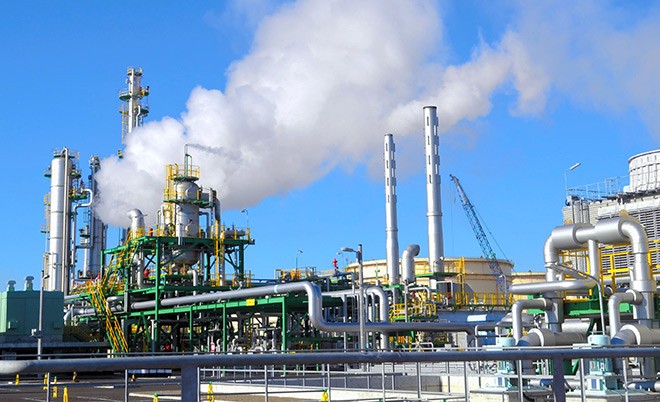 A demonstration experiment on carbon capture and storage, a technology for collecting carbon dioxide and storing it underground, is seen in Tomakomai, Hokkaido. (Asahi Shimbun file photo)

The material industry will need an estimated 24 trillion yen ($187 billion) in investments to reduce its greenhouse gas emissions to net zero by 2050, according to the ministry of trade and industry.

The ministry presented the figure at a meeting of the Industrial Structure Council, the ministry’s advisory body, on April 20.

The cost could rise since it is based on data compiled from each sector’s current estimates on what is needed to go carbon free by 2050, the target year for the government to achieve net zero carbon dioxide (CO2) emissions.

Carbon capture and storage (CCS), a technology for collecting CO2 and storing it underground, is included in the estimated cost.

The material sector, which comprises the steel, chemical, cement and paper businesses, is Japan’s key industry and accounts for about 20 percent of the country’s gross domestic product.

But massive amounts of fossil fuels are used in the manufacturing process in the sector, presenting a challenge to going carbon free.

CO2 emissions from the material industry make up 90 percent of those from the entire manufacturing sector and roughly 20 percent of Japan’s total emissions.

By sector, the steel industry is the largest emitter as its production process involves burning massive amounts of coal in blast furnaces.

The sector estimates it will need to spend 10 trillion yen to achieve carbon neutrality.

The industry aims to develop a new iron-making method using hydrogen, which does not emit CO2 when burned, but the process poses many technological challenges.

Electric furnaces, which consume a lot of electricity, are seen as another way of moving away from coal, but manufacturing costs are said to be higher compared to blast furnaces.

Many businesses in Japan’s material industry enjoy a large share of the global market thanks to their technological advantages.

The industry is also a major employer in areas where the factories operate, creating 220,000 jobs in the steel sector and 940,000 in the chemical sector.

The ministry is concerned that the large cost to go green could make the industry less competitive internationally.

The government decided in December 2020 to set up a 2-trillion-yen fund to provide support to companies developing technologies to help achieve carbon neutrality.