Ukrainian sells Olympic medal to fight Russia, may get it back 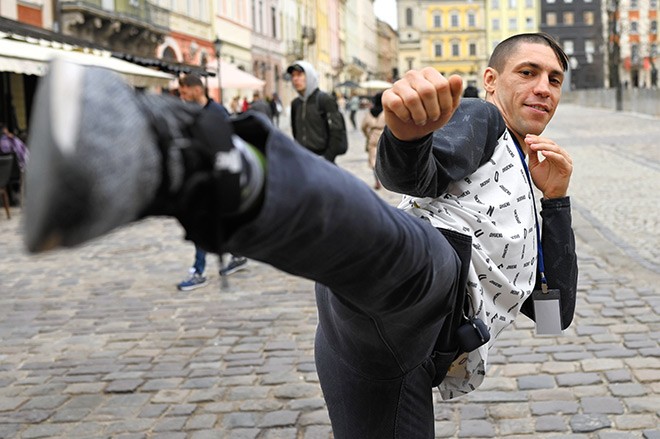 Stanislav Horuna, who won a bronze medal in karate at the Tokyo Olympics last year, on April 15 in Lviv, Ukraine (Koji Nishimura)

LVIV, Ukraine—Ukrainian Stanislav Horuna said an “unbelievable” development in Japan may help him regain the Tokyo Olympic medal that he sold to raise funds for his country’s defense against Russian invaders.

Horuna, 33, was among several Ukrainian sports stars who have auctioned off their medals and trophies and joined the Ukrainian military to counter the Russian offensive.

He said in an interview with The Asahi Shimbun in his hometown of Lviv in western Ukraine that the Olympic bronze medal he won in karate was bought by a Tokyo man, who now wants to return it to the karateka when the war is over.

“I am (already) grateful to him,” Horuna said. “The proceeds will go to the military, hospitals and other facilities assisting evacuees in Ukraine.”

Horuna, 33, won the bronze medal in the men’s 75-kilogram division of the “kumite” sparring category at the Tokyo Summer Games last year.

He said that although the medal was “precious” for him, the decision to sell it came fairly easy.

“What is important now is not my own affairs, but those involving our homeland,” he said. “Each person must fight in their own way. After sorting out my priorities, I found it was not so difficult to come to the decision (to sell it).”

In March, Horuna and other Ukrainian athletes from various sports put their hardware on the online auction block.

The starting price for medals was $10,000 (1.26 million yen) under the program. Some observers thought this was too cheap because the items represented the ultimate accomplishments in athletic careers.

“For me, $1,000 would have been enough,” Horuna said. “I would have been content if our endeavor attracted attention and raised money to help our homeland, even if the sum was small.”

His Olympic bronze medal fetched $20,500 in an online auction by eBay.

Horuna smiled when he read the interviewer’s business card.

“Your surname is Nishimura. Are you related to Ken Nishimura?” he asked.

Ken Nishimura (no relation to the reporter) was Horuna’s first opponent in the Tokyo Olympics.

The match was held on Aug. 6, 2021, at Nippon Budokan arena. Horuna took an early lead but Nishimura scrambled to tie the score.

“Nishimura is an excellent athlete,” Horuna said. “The match was difficult. I barely won.”

Horuna later received his bronze medal at the awards ceremony at Nippon Budokan, which was bereft of spectators as a precaution against COVID-19.

“It was a wonderful moment, but I had mixed feelings,” he said. “A bronze, of course, can be called a great landmark. Thousands or tens of thousands of athletes are competing to reach such an accomplishment.”

He implied that his target was the gold medal.

“But I was struggling to climb to the top, and I had spent years in preparation,” he said. “I felt a sense of delight and achievement. However, I was disappointed and discouraged at the same time.”

Still, the Olympic bronze was a particularly special one among the more than 200 medals he has collected through his nearly 20-year karate career.

He said that when he learned from the auction’s organizer that a man in Tokyo had bought the bronze medal, he felt “really happy about my medal going back to Japan.”

“I gained the medal in Tokyo,” he said. “Japan is special for me because I learned many things there.”

After Russia invaded Ukraine on Feb. 24, Horuna joined a military unit in Lviv to engage in security operations and activities to deliver residents to safety.

A month later, he was summoned by a superior officer and ordered to resume his karate training.

Men aged 18 through 60 are now expected to enlist in the Ukrainian military and are generally prohibited from leaving the country.

However, Horuna was given permission to travel to Portugal to represent Ukraine at the 2022 Karate 1-Premier League Matosinhos, which opened on April 22.

“As an individual, I am always working to take the top spot,” Horuna said before the trip. “But I have a far bigger goal now: heightening Ukraine’s presence in the international community. I would like people all over the globe to become aware of what is happening in Ukraine.”

He also expressed gratitude to Japan for its help in the crisis.

“Support and encouragement are coming in from faraway Japan during this war,” he said. “Now that my nation is in such a tough situation, I want to say ‘thank you.’”

He added that a most surprising thing has transpired in Japan.

“I received a message from the Japanese buyer via the auction organizer the other day,” Horuna explained. “He wrote that he wants to return the medal. He says he will invite me to Japan to hand it directly to me when this war ends and peace returns to Ukraine. Don’t you think that is unbelievable?

“But this is what Japan is like. I am looking forward for that day to come.”