Nissan steps up work to reuse EV batteries in Fukushima 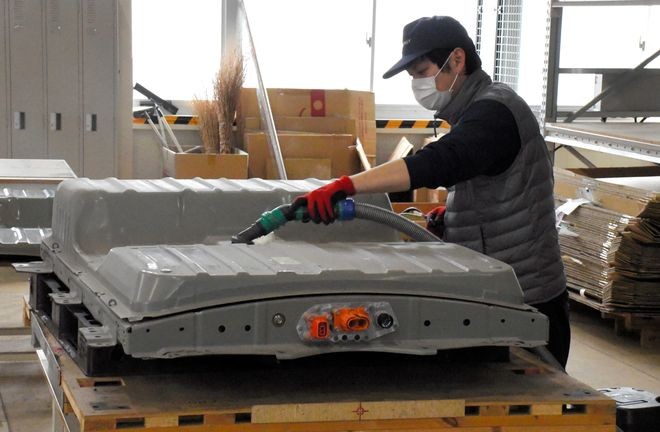 Those municipalities were hit hard by the Great East Japan Earthquake, tsunami and nuclear disaster of 2011.

Under the agreement, 4R Energy Corp., a Yokohama-based joint venture set up by Nissan and trading house Sumitomo Corp., will undertake a project of recycling and reusing batteries for electric vehicles.

Construction of 4R Energy’s plant in Namie was completed in 2018.

The plant’s shelves were recently seen filled with used batteries for electric vehicles, including Nissan’s Leaf model. An employee removed dust from a battery and checked its capacity and extent of degradation.

The batteries at the plant will be reused in new electric vehicles, or converted for use in golf carts or as household storage batteries, depending on the degradation levels.

After the accident at the nearby Fukushima No. 1 nuclear power plant in 2011, all reactors in Japan were shut down and stricter safety standards were imposed.

Reusing batteries not only reduces such emissions but can also help to save scarce resources used in batteries, such as cobalt and nickel.

Those materials could fall in short supply with the spread of electric vehicles.

“The key is how to build a mechanism for reusing batteries,” said Kunio Nakaguro, a Nissan executive vice president.

The reuse of batteries also provides another advantage.

Batteries degrade through repeated charging, which leads to lower prices of used electric vehicles compared with their gasoline-powered counterparts.

The total trade-in prices of electric vehicles and their batteries, however, are expected to rise when a battery-reuse mechanism is available.

There are hopes that a hike in trade-in prices will allay consumer concerns about buying electric vehicles and help to spread the automobiles.

4R Energy, which is currently reusing batteries that can power 1,000 electric vehicles a year, plans to expand that annual figure to between 3,000 and 5,000. The company is also weighing plans to build a plant overseas.

Company officials said they hope to extract scarce resources in the recycling process for use in new batteries.

Nissan, which put the Leaf on sale in December 2010, is releasing the new Ariya electric vehicle model on May 12 and an electric minicar later this year.

Nissan has been Japan’s leader in number of electric vehicles sold.

The automaker is now trying to set up a sustainable system that covers the entire life cycle of electric vehicles, including parts procurement, production, sale, collection of used vehicles and their reuse.

At the Michi-no-Eki Namie roadside rest area in Namie town, an artificial intelligence system can efficiently charge five Leaf vehicles with electricity generated from renewables. Those vehicles parked in the area are designated for official use by the town government.

The batteries of those Leafs are used to store surplus electricity generated from the renewables. They are not charged during times of the day when power rates are higher.

The power stored in the electric vehicles is also used for the roadside rest area, thereby reducing the total electricity charge by 40,000 yen ($313) a month, officials said.

“Close analysis of the way (the charging system) is used will help enhance our control technologies,” said Kazuhiro Doi, a Nissan corporate vice president. “We will continue with improvements so (the system) will be used in various communities.”