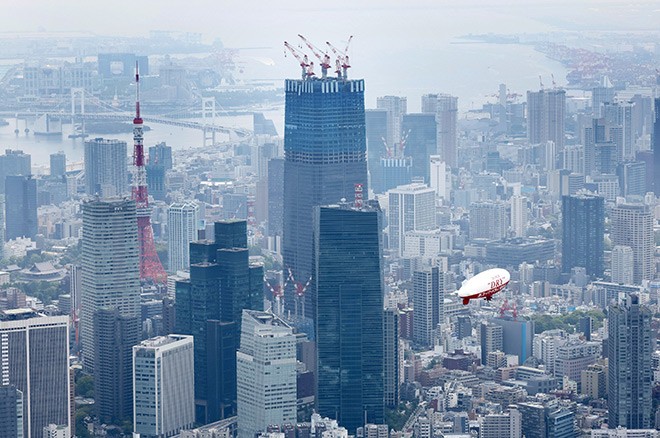 A ceremony is held on April 21 to mark the framework completion of a skyscraper, center, in the Toranomon and Azabudai districts of Tokyo’s Minato Ward. (Tatsuya Shimada)

The framework of a building set to become the tallest in Japan was completed after a crane hoisted a steel frame from the ground to place it at the top on April 21.

It took about three minutes for the frame to reach the height of 330 meters.

The skyscraper, called the A District tower, is part of Mori Building Co.’s project to redevelop a roughly 8.1-hectare area straddling the Toranomon and Azabudai districts in the capital’s Minato Ward.

When construction is completed next year, the structure will replace the 300-meter-tall Abeno Harukas building in Osaka as the tallest skyscraper in the country.

The building will have 64 stories above ground and a large office space with a total rental area of about 204,000 square meters.

The building’s 54th to 64th floors will accommodate 91 housing units built by Aman, the operator of a luxury hotel brand.

Keio University Hospital’s center for preventive medicine will take up the fifth and sixth floors.

About 2.4 hectares of the 8.1 hectares under development will be set aside for greenery space. A Mori Building public relations official said a high-rise building and a vast open space around it were needed to create a lush green area in central Tokyo.

Mitsubishi Estate Co. is constructing another skyscraper called Torch Tower at the northeastern side of JR Tokyo Station. The building, expected to be around 390 meters tall, is set to become the nation's tallest skyscraper in fiscal 2027 when construction is scheduled to be completed.