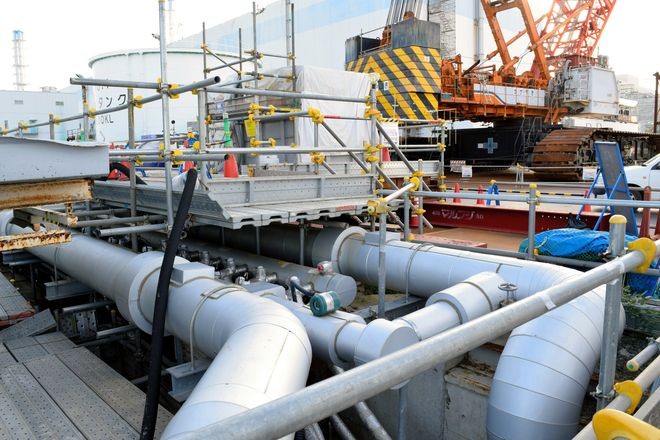 Technical flaws, ballooning costs and unconfirmed effectiveness have plagued the “ace card” in preventing groundwater from accumulating within the crippled Fukushima No. 1 nuclear power plant.

Plant operator Tokyo Electric Power Co. froze the soil to create an underground ice wall to divert the groundwater toward the ocean and away from the damaged reactor buildings where the liquid can become heavily contaminated with radioactive substances.

The 1.5-kilometer ice wall was completed in 2016 around the No. 1 to No. 4 reactor buildings of the nuclear plant. The ice barrier was initially expected to end its role in 2021, after steps were taken to prevent water leaks and plug holes at the reactor buildings.

Not only has the ice wall failed to work sufficiently, but huge amounts of public funds also continue to pour in annually for its maintenance.

“A frozen ground wall has advantages, such as a high ability to block water, but its maintenance requires huge sums,” said Kunio Watanabe, a professor of frozen soil studies at Mie University. “An easy-to-build underground ice wall was the only possible option in the early stages because of extremely high radiation readings around the reactor buildings.

“Now that it has been used for so many years, other approaches should also be weighed.”

TEPCO has used tanks to store contaminated water used to cool the melted nuclear fuel since the Great East Japan Earthquake and tsunami caused the triple meltdown at the plant.

But it is also storing the groundwater that keeps flowing in. Space for the water storage tanks at the nuclear plant is running out.

The ice wall was supposed to reduce the volume of contaminated water.

In October last year, TEPCO said the soil temperature was higher than 0 degrees in an area that should have been frozen. The temperature reportedly topped 0 in mid-September and increased to 13 degrees in November.

TEPCO said equipment to discharge rainwater accumulating in a different reactor building broke down. The rainwater there likely seeped into the ground and reached the spot with the temperature increase.

Steel sheets were inserted into the soil to stanch the groundwater flow.

A total of 1,568 cooling pipes extending 30 meters below the surface circulate a refrigerant of minus 30 degrees to freeze the soil.

However, 14 tons of the coolant leaked between January and February this year because of damaged pipes and slippage of rubber parts at their joints.

TEPCO located the leaks and replaced the pipes, but the coolant’s circulation was suspended during the procedure.

Since the soil must be kept frozen throughout the year, electricity charges and other expenses for cooling and circulating the refrigerant continue to grow.

Annual maintenance costs topped 1 billion yen immediately following the wall’s introduction, and hundreds of millions of yen are currently injected in the system each year.

Despite all the fixes and expenses, the strategy’s effectiveness has yet to be verified.

TEPCO in March 2018 released an estimate arguing the frozen wall would prevent 95 tons of groundwater from entering the plant daily. That level would be half of the inflow with no underground barriers.

The prediction, however, was exclusively for winter months with less rainfall. It did not include torrential rain from typhoons that increase the amount of groundwater flowing into the reactor buildings.

TEPCO recently declined to comment on the ice wall’s effectiveness, saying it is “difficult to assess individual countermeasures because many steps are being implemented simultaneously.”

Frozen soil barriers are normally used for only several months in tunnel digging and other construction projects. There have been few large ice walls that have been operated for years.

The government and TEPCO originally planned to rely on the method “until March 2021, when countermeasures against water leaks at reactor buildings are finished.”

But they have not started on the anti-leakage process for the structures.

They do, however, plan to release treated water stored at the plant into the sea, a proposal that has been criticized by residents and the fishing industry.

Radioactive water increases by 150 tons a day at the Fukushima plant.

TEPCO set a goal of lowering the daily contaminated water rise to 100 tons or less by 2025. It described the “frozen soil wall as equipment essential for accomplishing the objective.”

TEPCO in December last year told the Nuclear Regulation Authority that it will continue to use the frozen wall system.

“We will consider the next step,” a TEPCO official said. “We are sorting out alternatives so a new approach will be realized in 2024 or 2025.”