Offshore tours of Shiretoko can be treacherous due to fast currents 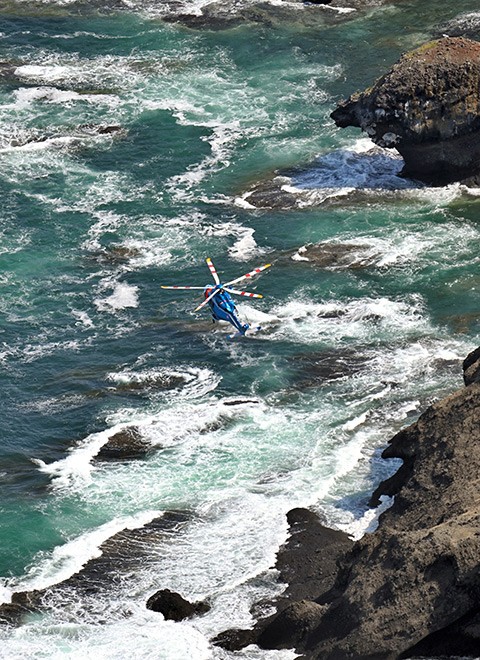 The spectacular Shiretoko Peninsula in eastern Hokkaido, a World Natural Heritage site, is a magnet for tourists keen to revel in the magnificent natural landscape and wildlife of the country’s northernmost main island.

But navigating coastal waters by pleasure craft, which offers the best option of spotting brown bears roaming the seashore or white-tailed eagles flying overhead, can be perilous, as an incident April 23 showed when a boat with 26 people began taking on water in stormy weather. As of early April 24, the bodies of 10 had been recovered.

The boat season generally starts in late April and lasts until October. It is a popular mode of travel due to the lack of passable roads in many parts of the wilderness area, according to the operator of a guest house in Shari, the town whose jurisdiction includes the peninsula.

A typical boat tour involves heading to a lighthouse at the tip of the peninsula and enjoying views of the Kamuiwakka Hot Falls, geothermally heated groundwater produced by a volcano on the peninsula, as well as a range of wildlife.

Several companies offer boat tours of the western side of the peninsula, including Shiretoko Pleasure Boat, whose vessel Kazu 1 went missing after sending a distress call on April 23.

It was an unusually early departure as most offshore tours start from around the end of April, according to the man who is in his 50s.

He said it was not uncommon to cancel a scheduled tour at the last minute after weather conditions suddenly deteriorate or waves are rough.

Kenichi Suzuki, a 55-year-old tour guide for the Shiretoko area, said the water and currents near the Kashuni Falls in the western part of the peninsula where the boat was taking on water when it issued an SOS, are known among locals to be treacherous.

“The currents can flow so fast, just like in a river,” he said, adding that boats can easily run into trouble when the water is churning high waves.

Shiretoko Pleasure Boat’s website says the company operates a tour of the western part of the peninsula, including the Kamuiwakka Hot Falls and Kashuni Falls, for one to three hours after leaving Shari’s Utoro district. Aside from Kazu 1, which has a capacity to carry 65 passengers and crew, it has another one capable of accommodating 60 people.