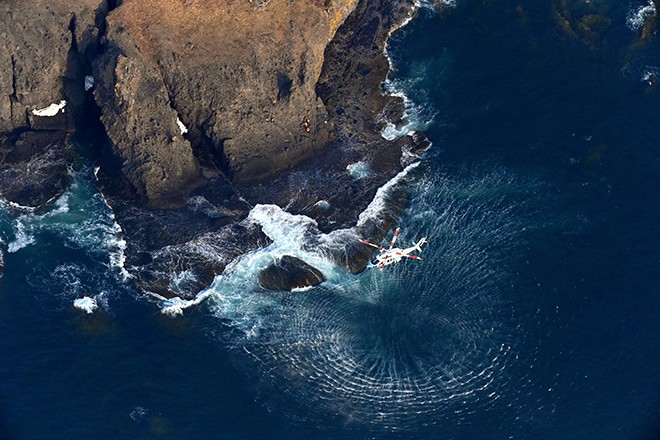 Rescuers search the Shiretoko Peninsula in eastern Hokkaido on April 24 after a tour boat carrying 26 people went missing the day before. (Sayuri Ide)

The body of a 3-year-old girl retrieved after a tour boat disaster in eastern Hokkaido brought the death toll to 11, with 15 people still missing, officials said.

The First Regional Coast Guard Headquarters based in Otaru, Hokkaido, said April 25 its vessels have expanded search and rescue operations in the area.

The boat, the Kazu I, departed Shari and disappeared in frigid waters off the Shiretoko Peninsula after sending an SOS on the afternoon of April 23.

A Hokkaido government fishing patrol boat found the girl unresponsive around 14.5 kilometers east of a light house on Cape Shiretoko at 8:55 p.m. on April 24. The child was pulled from the water at 11:10 p.m. and was later confirmed dead, according to the First Regional Coast Guard Headquarters.

The deputy head of Shari, where a morgue was set up, said the girl joined the tour with her parents, whose whereabouts remain unknown.

The girl’s grandparents are now in Shari.

Another child is among the missing.

The bodies of seven men and three women were earlier found either in the water or washed up on rocks on the coast near Cape Shiretoko.

The locations of the bodies were about 15 km from Kashuni Falls, the point where the Kazu I was believed to have sent the emergency distress call at 1:13 p.m. on April 23, saying it was taking on water.

The girl’s body was likely carried by ocean currents to a location east of that area.

At the time of the accident, 26 people were aboard the boat, including two crew members.

A Coast Guard vessel equipped with a sonar is conducting an undersea search for the Kazu I and people possibly trapped inside.

But the operation faces difficulties because the seabed topography where the boat disappeared is complex, reaching depths of more than 100 meters at some points.

On April 25, about 30 relatives of missing tour participants attended closed-door briefings given by Shari Mayor Takashi Baba, Coast Guard officials, and the president of Shiretoko Pleasure Boat, the tour operator.

The relatives sobbed while listening to the information.

According to Baba, the tour boat company will give a news conference about the disaster.

Baba and Coast Guard officials said the top priority is to continue the search.

Three of the 11 dead were identified, according to Shari Deputy Mayor Masahiro Kita. They were from Fukushima, Chiba and Kagawa prefectures.

Kita said relatives were first shown articles of the deceased, such as shoes and trousers. If they look familiar, the relatives were then asked to identify the bodies.

The land ministry on April 24 started a special investigation into whether Shiretoko Pleasure Boat is liable for faulty safety management regarding the April 23 accident.

Investigators are studying the company’s safety management code that stipulates weather conditions, such as wind speed and wave heights, when boat tours cannot be held.

According to the Coast Guard, the Kazu I was involved in accidents in May and June last year, including becoming grounded in shallow waters.

Noriyuki Toyoda, 54, captain of the boat when it went missing two days ago, was the skipper of the Kazu I during the two previous accidents.