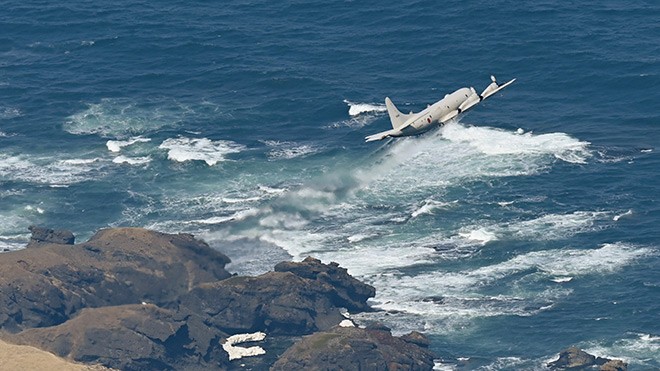 A Self-Defense Forces airplane searches for the missing Kazu 1 boat and its passengers off the coast of the Shiretoko Peninsula in Hokkaido on April 25. (Sayuri Ide)

The captain of the Kazu 1 tour boat was advised to stay ashore on April 23 because of rough weather. But the boat left Utoro Port in Shari, Hokkaido, at 10 a.m. that day, carrying 26 passengers and crew.

The Kazu 1 is believed to have sunk hours later, leaving at least 11 people dead and 15 missing.

As the search continues for victims of the disaster off the Shiretoko Peninsula, questions are being raised about whether the captain or the tour boat operator, Shiretoko Pleasure Boat, had taken appropriate safety measures.

A man who operates a different tourist boat business in Shari said he told the Kazu 1 captain on the morning of April 23 that the sea would likely be rough from the afternoon.

“You shouldn’t take the boat to the sea today,” he said he told him.

Another man who works in the tourism industry said the currents flow fast in the area where the Kazu 1 went missing.

“The forecast for the day was that the sea would be rough,” he said. “If it had been my company’s boat, it wouldn’t have been allowed to leave the port.”

He said his boat remains moored if the wind speed is 54 kph or more, or if the wave height is 2 meters or higher.

The Kazu 1 is believed to have been the only vessel that took to the sea from the port on April 23.

According to the land ministry’s Hokkaido Development Office, the waves were around 3 meters in height where the Kazu 1 was located at 1:30 p.m. on April 23, just after it made a distress call.

A 64-year-old fisherman working at Utoro Port said the sea in the area can be treacherous.

The current flowing in a north-east direction is fast and there are many reefs, he said. In addition, the waters tend to be rough until mid-May, when the cold weather finally ends.

He said the operator of the Kazu 1 must have known from the forecast that the sea would be rough from the afternoon of April 23.

“It is crucial not to take risks when operating a boat, especially when passengers are aboard,” the fisherman said.

According to the Japan Meteorological Agency, winds moving around a low-pressure area above the Sea of Okhotsk were blowing in the area of the sea where the boat went missing.

An observation point in the Utoro district recorded an instantaneous wind speed of 12.96 kph at 1:10 p.m. on April 23.

Yoshihiko Yamada, a professor at the school of marine science and technology at Tokai University, said the Kazu 1 could have run into engine problems.

If a boat loses its ability to move straight, its hull becomes vulnerable to strong waves and winds, he said.

“There are many reefs near the Shiretoko Peninsula. Because of the day’s weather, the Kazu 1 could have continuously been swept toward land. It might have run aground, puncturing its hull and causing the boat to sink.”

Boats generally can balance themselves even in strong winds or waves if their bodies are not damaged.

Shiretoko Pleasure Boat was told that the Kazu 1’s hull was tilting at a 30-degree angle.

“Passengers cannot even stand on their feet if a boat tilts at a 30-degree angle,” Yamada said.