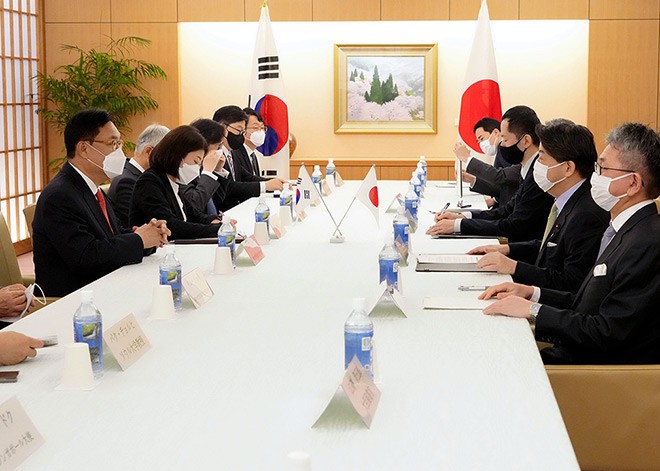 The seven-member delegation arrived in Japan on April 24 to outline the diplomatic policies and priorities of the Yoon administration ahead of its inauguration in May.

“South Korea and Japan should expand bilateral exchanges and trade to build a future-oriented relationship because we were destined to be neighbors,” Chung Jin-suk, the deputy speaker of the National Assembly who heads the delegation, told reporters after the meeting.

“It is difficult to resolve the long-standing issues between the two nations if only one works toward that goal,” he said. “We need to make diplomatic efforts by making the most of this new starting point for the two countries’ relations.”

Another key member of the delegation is Park Cheol-hee, a professor of Japanese politics at Seoul National University who is fluent in Japanese and considered a candidate for next South Korean ambassador to Japan.

Sources said the two sides exchanged views during the meeting on how to improve relations between the two countries, which soured during the administration of Moon Jae-in over the issues of “comfort women,” who were forced to provide sex to Japanese soldiers before and during World War II, and former Korean wartime laborers.

Yoon had also entrusted the delegation with a letter addressed to Prime Minister Fumio Kishida that expresses his willingness to improve the two countries’ ties.

“The letter expresses (Yoon’s) hope for a new bilateral relationship and a positive response from the Japanese side,” Chung told reporters at Narita Airport on April 24.

The delegation is scheduled to stay in Japan until April 28 to meet with other politicians, business leaders and experts. It is also arranging to meet Kishida on April 27.

(This article was written by Takuya Suzuki in Seoul and Yuichi Nobira in Tokyo.)