Saori Ueda shares a video from the boat tour in Hokkaido that she joined in September 2020. (Provided by Saori Ueda) 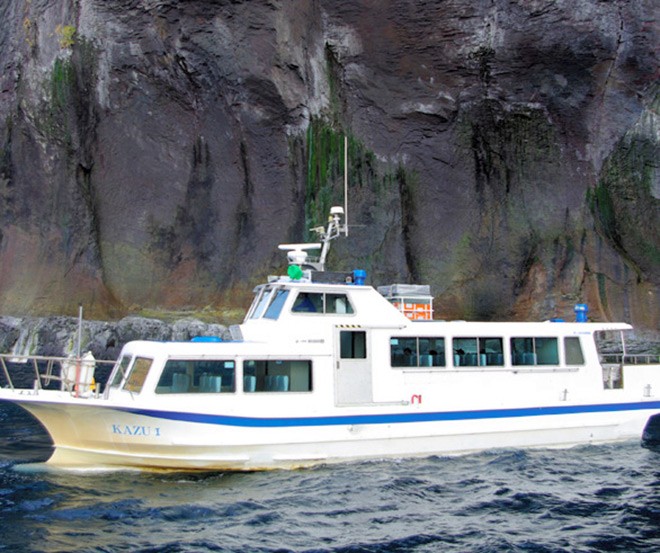 The Kazu 1 (From the website of Shiretoko Pleasure Boat)

Saori Ueda felt a sense of fear when she learned about the tour boat accident in Hokkaido.

“This is a boat operated by the same company we took a tour with two years ago,” she said. “I am scared wondering if an accident could have occurred at that time.”

Ueda, a resident of Tokyo’s Edogawa Ward, showed pictures and videos she took from the tour. One video clip showed the entrance of the office of Shiretoko Pleasure Boat, a company based in Shari, Hokkaido.

The company operates the Kazu 1 tour boat that disappeared off the Shiretoko Peninsula after sending a distress signal at 1:13 p.m. on April 23. It was carrying 26 passengers and crew members.

Ueda and her husband were traveling in Hokkaido and booked a tour with Shiretoko Pleasure Boat through the hotel where they were staying.

The couple boarded a small vessel called the Kazu 3 in September 2020. The passenger capacity of the Kazu 3 is five less than that for the Kazu 1, according to the company’s website.

Ueda said the three-hour tour departed Utoro in the central part of the Shiretoko Peninsula and started the return part of the trip near the north end of Cape Shiretoko.

Announcements were made when the vessel passed must-see spots, for example, “There it is, the Kashuni Falls,” Ueda said.

The boat also made brief stops to allow passengers to view the sites with rented binoculars.

The company’s website advertises the tour as one that takes passengers “up close to falls and oddly-shaped rocks,” and promises a “94 percent chance to see ‘higuma’ (brown bear).”

Ueda said she observed bears about five times during the tour.

The boat sometimes moved toward land to bring passengers closer to a bear, she said.

“Watching the video again, we observed the bear at quite close range in some locations,” she said.

Ueda said she fears for the people on the Kazu 1 because of the cold of the ocean.

It was September when she joined the tour, and the weather was quite chilly and very windy.

She wore long-sleeved clothes but could not stay outside and moved to the inside of the vessel, she said.

“I cannot imagine how cold it gets there at this time of the year,” she said.

She said her cellphone reception was poor while on the boat, and she could not post messages on social media.

“I wonder if many of the passengers could not send an SOS message,” she said. “I pray for their safety.”