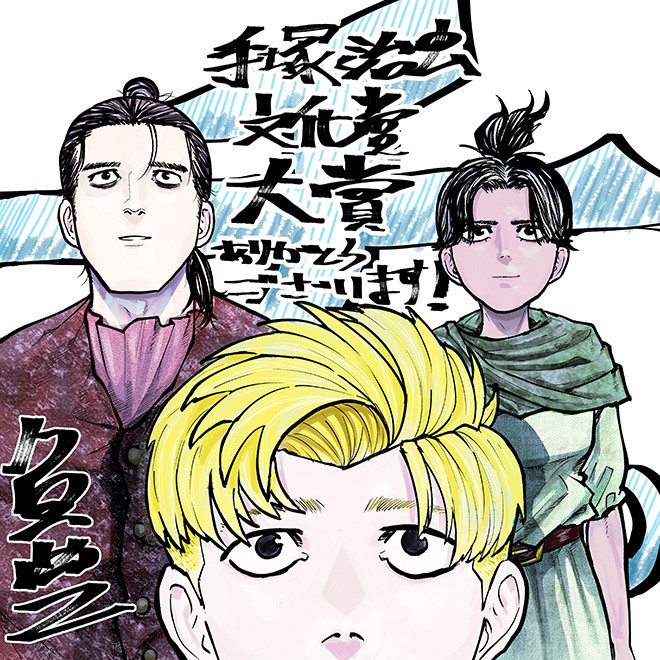 An illustration drawn by Uoto to mark his winning of the Manga Grand Prix at the 26th Tezuka Osamu Cultural Prize (Provided by Shogakukan Inc.)

The Originality Prize, given for fresh talent and new modes of expression, went to manga artist Natsuko Taniguchi for her works “Kyoshitsu no Katasumi de Seishun ga Hajimaru” (Your youth starts at the corner of a classroom) and “Konya Sukiyaki Dayo” (Today’s dinner is sukiyaki).

The prizes, sponsored by The Asahi Shimbun Co., honor the indelible mark the “Astro Boy” creator left on manga culture.

The awards ceremony will be held at the Hamarikyu Asahi Hall in the Tsukiji area in Tokyo on June 2.

Each winner will receive a bronze statue.

The winner of the Manga Grand Prix will also take home 2 million yen ($15,580), while the Originality and Short Story Prize winners will each receive 1 million yen.

“Chi. Chikyu no Undo ni tsuite” is a fictional story set in medieval Europe about people who risked their lives to study and prove the heliocentric theory, an idea regarded as heretical at the time.

“Chi. Chikyu no Undo ni tsuite” started as a manga series in the weekly manga magazine “Big Comic Spirits” in 2020 and includes a tinge of philosophy Uoto studied as student.