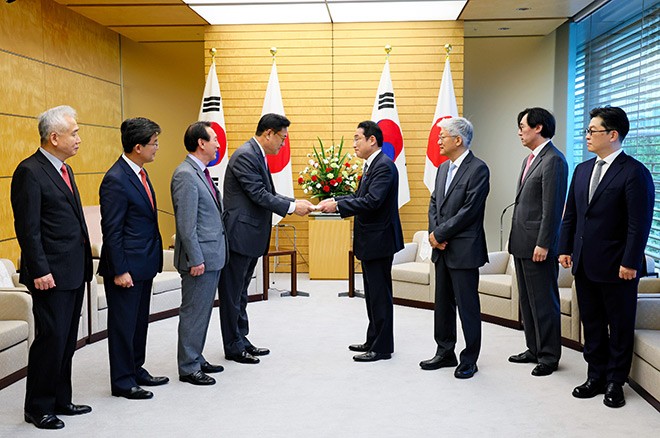 Japanese Prime Minister Fumio Kishida met with a delegation representing South Korea’s incoming leadership, despite concerns raised in ruling circles that it was still too early for such talks.

A source close to Kishida said they decided to go ahead with the meeting because when the South Korean group met with Foreign Minister Yoshimasa Hayashi the previous day, there was a solid display of willingness to work toward improving relations between the two countries.

The delegation, headed by Chung Jin-suk, the deputy speaker of the National Assembly, handed Kishida a letter from Yoon.

Yoon has signaled he wants to turn around bilateral ties that had quickly deteriorated under his predecessor, Moon Jae-in.

According to Foreign Ministry officials, the visiting delegation made clear they want to cooperate to improve the relationship, given its importance.

Government sources said that during the meeting, Kishida brought up the war in Ukraine, the expansive military moves made by China and North Korea’s recent series of missile launches.

“Under an international climate in which the global rules-based order is being threatened, there has never been more need than now for strategic cooperation between Japan and South Korea, as well as between our two nations and the United States,” he told the delegation.

He said there is no time to waste in revitalizing bilateral relations.

Kishida also emphasized the importance of resolving such issues as lawsuits brought by laborers from the Korean Peninsula who worked in Japan before and during World War II.

Back in 2015, Kishida served as foreign minister under Prime Minister Shinzo Abe, while South Korea was led by Park Geun-hye. At the time, the two countries reached an agreement to set up a foundation to help former comfort women who were forced to provide sex to Japanese soldiers before and during World War II.

The Biden administration has called on both Japan and South Korea to work at strengthening bilateral ties.