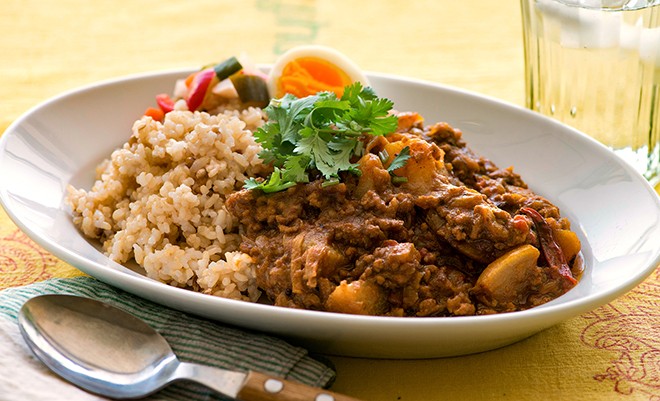 After graduating from university, Nahomi Edamoto worked part-time at a fusion-style restaurant her friend had opened in Tokyo’s Nakano Ward and began cooking.

“I had cooked for myself as I lived on my own, but it was slapdash,” she says.

To serve the guests good food, she would use spices she found at the restaurant and experimented with dishes until she came up with tasty treats.

At the time, Edamoto was an aspiring actress and a member of a theatrical company. The theater was in what resembled a warehouse district, and there were no places to eat nearby.

The theater group decided to cook meals for the audience and the troupe members, and Edamoto, since she was working at the restaurant, was put in charge of cooking.

She would make curry that filled a large pot.

“Almost every day, I single-handedly cooked for 40 to 50 people,” she says.

She would cook sliced onion slowly, add spices and simmer.

Since the theatrical company was short of funds, Edamoto was creative with the ingredients.

A popular menu was curry featuring daikon radish, which was inexpensive, bulky and less likely to crumble. She even added its peel to the pot.

Making a play on words, a director jokingly told her, “No wonder you are a ‘daikon yakusha.’” The term means an unskilled actor.

While she was wondering what to do next, a writer with whom Edamoto had worked with at the restaurant got her an assignment to write cooking articles for a magazine.

That was her first step in her career as a cooking expert.

“I did not study at a culinary school and began cooking haphazardly,” says Edamoto. “If you ask me what my starting point is, I think it is curry. The experience of serving a large group of people formed the basis of my cooking career.”

In this week’s recipe, sliced onion is microwaved first to shorten the cooking time.

How far you want to stir-fry it after that depends on your stamina. The flavor will deepen if you stir-fry until the onion turns dark.

Nahomi Edamoto: Born in Yokohama in 1955, Edamoto worked at a fusion-style restaurant while she was a member of the theatrical company Tenkei Gekijo. She has written many books, including “Kukkingu to jinsei sodan” and “Edamoto Nahomi no riaru asa gohan.” She is a co-representative of the Big Issue Japan Foundation, a nonprofit organization that aims to solve problems of poverty with a focus on supporting those in need.

1. Halve onions. Then cut horizontally in half and slice finely. Place slices in heat-proof bowl, cover with plastic wrap and microwave at 600 watts for 12 minutes.

3. Pour oil in large frying pan or pot and place on heat. Add Ingredient A (if available) and then Ingredient B. Add microwaved onion and cook for 15 minutes on higher medium heat while mixing occasionally until it turns brown.

4. Place daikon in heat-proof bowl, cover with plastic wrap and microwave at 600 watts for 10 minutes.

5. Add ground pork to onion, loosen it and cook until it changes color. Add Ingredient C and cook until nicely mixed. Add daikon plus 2 and 1/2 cups water and mix. Simmer on medium heat for about 20 minutes while stirring occasionally.

6. Taste and add salt, pepper, garam masala or yogurt to taste. Serve with rice as well as boiled egg and coriander on the side.

Assuming that the ingredients serve four, about 345 kcal and 2.4 grams salt per portion of roux
(Nutrient calculation by the Nutrition Clinic of Kagawa Nutrition University)

(This article was written by Mika Omura and Miki Kobayashi.)

This column, translated from The Asahi Shimbun’s Jinsei Reshipi (Life Recipe) column, will next appear on May 19.