Frantic calls for help as skipper tried to save his passengers 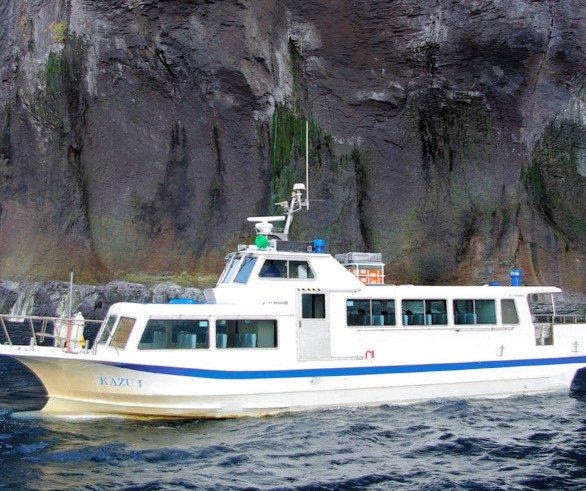 The Kazu I pleasure boat that went missing April 23 off the Shiretoko Peninsula with 26 people on board. (Captured from the Shiretoko Pleasure Boat website)

An employee of a rival pleasure boat company in Hokkaido described harrowing calls for help from the skipper of a sightseeing craft that went missing in rough seas April 23, but was stuck ashore and could do little more than alert authorities of the unfolding disaster.

The last words he heard from the captain of the stricken craft were, “The boat may sink.”

It emerged that the man was in closer contact with the skipper than the operator of the boat, Shiretoko Pleasure Boat.

The company was unable to make contact with the captain of the Kazu I because the radio antenna at the head office in Shari went on the blink this winter.

The man told The Asahi Shimbun he ended up making an emergency call at 1:13 p.m. on April 23 to alert the Japan Coast Guard that the Kazu I was taking on water and in danger of sinking.

Around 1 p.m. that day, the man, anxious about the change in weather, went to the Shiretoko Pleasure Boat office to inquire when the Kazu I with 24 passengers and two crew members aboard was expected to return to port. But an employee at the office said the captain could not be reached on his mobile phone.

The man returned to his own company office and started up the ham radio to contact the Kazu I.

A few minutes later, the Kazu I captain said the boat was near the Kashuni Falls off the Shiretoko Peninsula, but would be very late returning to port. The captain sounded calm at that time, but about 10 minutes later became frantic.

During their brief chat, he said he could hear the captain yelling to the only other crew member to make sure the passengers put on life vests.

Overcome with worry, the man kept up his ham radio contact with the Kazu I captain, who told him the boat’s engine had stopped working because the vessel had taken on water.

“The boat may sink,” the captain shouted.

At that point, the man on shore contacted the Coast Guard.

He then informed the Shiretoko Pleasure Boat office about his exchange with the Kazu I captain.

Earlier that day, when passengers were boarding the Kazu I, a former crew member of the Kazu I who happened to be in the office helping out instructed them on how to use binoculars to spot wildlife such as brown bears and white-tailed eagles as well as don a life vest in an emergency.

The pleasure trip was supposed to have lasted around three hours.

After he was informed about his radio exchange with the Kazu I captain, the former employee desperately wanted to take another boat operated by Shiretoko Pleasure Boat to come to his assistance, but was forced to abandon the idea because of the stormy weather.

The former employee who helped the passengers when they boarded said he took part in the subsequent search and rescue effort because he remembered the faces of everyone who took the trip.

Eleven bodies have been recovered to date, but the remaining 15 are still unaccounted for.

The former employee recalled telling the captain of the Kazu I on April 22, the day before the tragedy, that the broken radio antenna at the Shiretoko Pleasure Boat office should be fixed.

But the captain seemed unconcerned, saying he could communicate with the office by mobile phone.