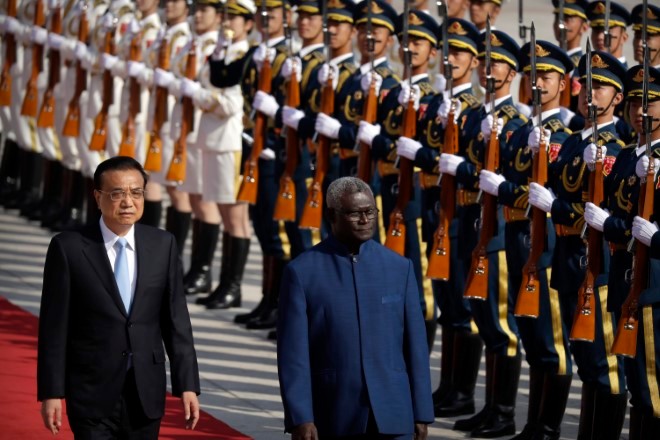 SYDNEY--For the first time in decades, the actions of a foreign state have taken center stage in an Australian election campaign, analysts said, as China’s security pact with the Solomon Islands reverberates into neighbor Australia’s domestic politics.

Australian Prime Minister Scott Morrison saw a hawkish stance on China as an electoral strength. But weeks out from an election, his conservative Liberal Party is on the back foot on national security, accused by the Opposition Labor Party of bungling diplomacy in the Pacific and making Australia “less secure”.

University of Sydney professor Simon Jackman, who studies the major issues for Australian voters in elections, said a perceived threat from another country has not been an election focus since the Cold War.

“For a younger set of voters there is nothing (like that) in living memory,” he said in an interview.

Behind in the polls, Morrison’s Liberal government had pointed to its stances on China as a reason to support his party and claimed without evidence that Beijing was backing the Labor opposition.

Now Labor is highlighting the Liberal government’s failings on national security, its alleged neglect of Pacific diplomacy, and the sale of the northern port of Darwin to a Chinese company on a 99-year lease.

Morrison on Sunday said that if China built a base in the Solomon Islands, it would be a “red line” for Australia.

“We know that the Solomons is a strategic destination. We know during World War Two some of the fiercest and most important battles for control of the Pacific occurred there,” opposition Labor leader Anthony Albanese said after Beijing announced it had signed the security pact. Labor seized on Deputy Prime Minister Barnaby Joyce’s likening the situation to the Cuban Missile Crisis.

Pivoting its campaign away from cost of living and jobs, Labor on Tuesday unveiled a plan to boost diplomacy, soft power, climate change and financial aid in the Pacific, cementing the Solomons pact as an election focus.

Morrison said the government was already doing many of the things Labor proposed and had struck the AUKUS and Quad security partnerships to “provide counterbalance” to China in the region.

“They are playing politics with the Pacific, and the only ones who are benefitting from Labor’s attacks on the Government is the Chinese Government,” he told reporters, campaigning in Queensland.

Australia’s former top diplomat for the Indo-Pacific, Richard Maude, said that the Labor and Liberal parties are “throwing hand grenades at each other on China”, but that Labor’s promise to re-invest in diplomacy was a substantial policy difference.

“On the Solomons, we will never know. Pacific Island governments have their own agency… the Coalition is actually spending record dollars in the Pacific, despite Labor criticism,” said Maude, executive director of Asia Society Australia.

A Newspoll for The Australian newspaper this week showed center-left Labor maintaining its 53-47 lead on a two-party preferred basis against the conservative Liberal-National coalition.

John Blaxland, a professor of international security at the Australian National University, said Morrison’s government had tried to make China a priority issue for voters, but it had backfired.

“The news from Solomon Islands will have blunted its utility for the Coalition,” he said in an interview.

Both Liberal and Labor governments had a record of “stop-start, feast or famine” engagement with the Pacific islands, he said.

Whether Australian voters care as much about a resurgent China as the politicians on the campaign trail remains an open question.

A 2001 election held against the backdrop of the September 11 terrorism attacks saw the Liberal government returned to office invoking fear of terrorism to toughen borders--a policy area Labor has learned to mirror.

Apart from this, Jackman says, national security has rarely been a big factor for voters. He added that there was “barely an iota of difference” between the major parties on China policy.

Polls this year have shown the economy, climate change, housing affordability and health were bigger issues for voters, he said.