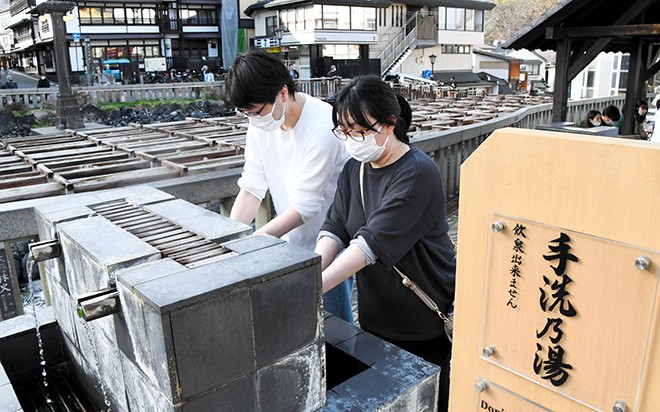 Tourists wash their hands with hot spring water at “Tearai no Yu” stations in the center of the Kusatsu hot spring resort in Kusatsu, Gunma Prefecture, on April 22. (Kaho Matsuda)

The tourism sector is prepared to capitalize on the first Golden Week holiday period in three years held with no domestic COVID-19 restrictions in place.

The holiday period starts on April 29 and runs into early May.

Overseas travel restrictions have also eased, and travel agencies announced in mid-April that they were accepting reservations for tours to Hawaii over Golden Week after a roughly two-year hiatus.

A 35-year-old company employee who lives in Tokyo’s Toshima Ward got excited at the news because she wanted to visit the Aloha State, where she had spent her honeymoon, again with her young children.

“I don’t feel like traveling anytime soon because I’m still concerned about the coronavirus,” she said. “But the resumption of tours to Hawaii made me more eager to visit there.”

The Japanese government relaxed its advisory for trips to the United States to level 2, which only asks people to refrain from unnecessary travel. The previous advisory recommended canceling all trips to the country.

Major travel agency JTB Corp. said the number of reservations for tours over Golden Week had remained relatively low since the resumption of bookings was announced just before the start of the holiday period.

Still, JTB received 750 reservations for tours scheduled until September, mainly from people planning to travel during the summer holiday.

However, few people seem ready to visit destinations abroad. Many prefer to stay in Japan, where the number of new COVID-19 cases has declined.

No state of emergency or pre-emergency measures have been issued in Japan ahead of Golden Week.

But new ways of sightseeing while taking precautions against the virus have gained traction among still-wary travelers.

The Kusatsu onsen in Kusatsu, Gunma Prefecture, last year was voted the top hot spring resort that respondents would like to visit again.

Kusatsu topped Hakone in Kanagawa Prefecture, which had held the top spot for 15 years since surveys by the Jalan Research Center, which specializes in tourism and leisure, started.

A research center official cited Kusatsu’s efforts to create an environment to prevent the spread of the virus. For example, the resort installed “Tearai no Yu” stations in the center of the area for visitors to wash their hands with hot spring water.

Users have praised the stations, saying the water is much gentler on the skin compared with alcohol-based hand sanitizers.

The town said it plans to install two more Tearai no Yu stations to bring the total to seven.

According to the Kusatsu onsen tourism association, 70 to 80 percent of its 122 member ryokan inns are fully booked for Golden Week.

“They (the inns) have made various efforts to attract tourists since the pandemic started,” said an official of the association. “They have high hopes for this year’s Golden Week.”

In August 2020, JTB started selling tours that use a video conference system to allow participants to virtually visit sightseeing spots both at home and abroad and chat with locals.

In other package tours, participants can take in a 360-degree view of destinations by wearing virtual reality headsets.

“We want to continue providing online tours so that customers can enjoy themselves more when they go on actual trips,” a JTB official said.

(This article was written by Hiroko Saito, Kaho Matsuda and Takaaki Fujino.)