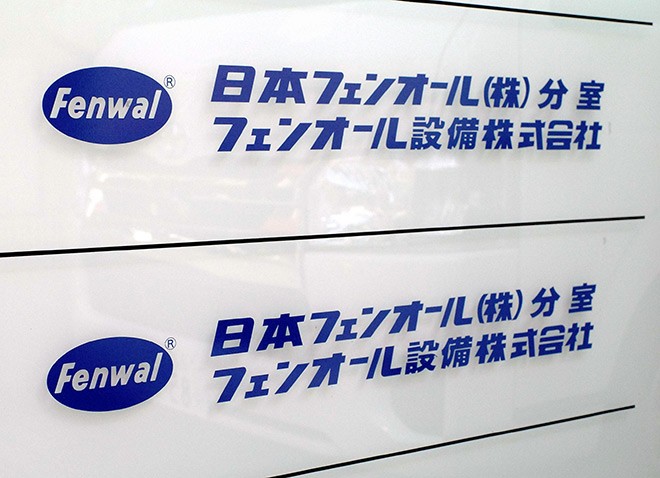 A sign for Fenwal Controls of Japan Ltd. at the company’s office in Tokyo's Chiyoda Ward (Toshio Tada)

The Japan Fire Equipment Inspection Institute has revoked approval for four types of fire detection products, thousands of which are installed at nuclear power plants across Japan.

The decision to pull the approvals comes amid revelations that the manufacturer, Tokyo-based Fenwal Controls of Japan Ltd., had committed misconduct to ensure the four products would pass certification tests carried out by the institute.

The Japan Fire Equipment Inspection Institute is a public organization which, under the Fire Services Law, tests and approves fire prevention equipment for quality control.

This is the first time the organization has revoked approval for a product.

The internal affairs ministry’s fire and disaster management agency has instructed Fenwal to recall the four products--around 10,000 devices in total--and replace them.

The products in question are two types of fixed-temperature fire detectors, numbering at 4,869, and two types of signal transmitters, of which there are 4,764 installed throughout the country.

The institute on March 31 revoked its passing grades to all these products in tests called “mandatory model conformity inspections.”

The fire detectors are mostly installed on ceilings and issue a signal when they detect heat. Transmitters then send the signals issued by fire detectors to receptors to communicate the fire across large distances.

The fire detectors and transmitters in question were shipped to corporate customers of Fenwal. Around 60 percent of the products, or 6,055, have been installed at nuclear power stations operated by Tokyo Electric Power Co. or Kyushu Electric Power Co.

Sources said the misconduct apparently occurred as Fenwal tried to increase its sales after the 2011 triple meltdown at TEPCO’s Fukushima No. 1 nuclear power plant, which prompted stricter fire-prevention measures at nuclear power plants across Japan.

TEPCO decided on April 27 to replace all the products in question at its nuclear power plants.

Fenwal will replace the products that have been installed at places other than nuclear power plants.

When Fenwal showed these products to the Japan Fire Equipment Inspection Institute for testing and approval, it put stickers on them that said they were made of approved parts. But it was later discovered that they were in fact made of unapproved parts.

The company said it checked these products at clients’ buildings after the misconduct came to light and confirmed that they worked properly.

But Fenwal also revealed that when it checked 10 products it had in stock after the misconduct was uncovered, four did not meet the standards.

Three of these products did not function at low temperature, and one did not work properly in a test in which water was poured on it to test how it stands up to condensation.

TEPCO initially said it would consider whether to keep using some of the questionable products or replace them.

However, after it publicly announced on March 31 that the products had been installed at its nuclear power plants, it discussed the issue internally several more times.

Then on April 27, the utility told the media that it will replace all of the dubious products.

(This article was written by Kenji Izawa and Shimpei Doi.)