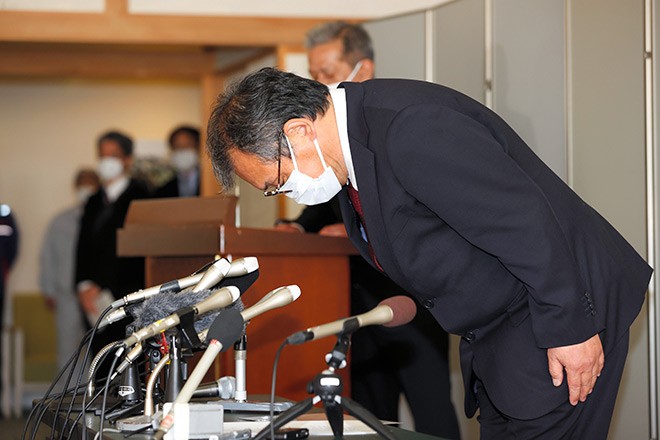 SHARI, Hokkaido--Grieving relatives of those lost in a pleasure boat tragedy here reacted angrily after the president of the operating company finally emerged April 27 and got down on his hands and knees at a news conference to apologize.

The overall sentiment among local residents as well was that Seiichi Katsurada, the president of the Shiretoko Pleasure Boat company, waited far too long to apologize, leading to questions about his sincerity. Many viewed Katsurada’s gesture of atonement, which he repeated twice, as simply formulaic.

“I saw him for the first time on the TV news,” said the father of Yu Nudeshima, one of the 11 people whose deaths were confirmed and was from Chiba Prefecture outside Tokyo.

Speaking to reporters on the night of April 27 after the news conference that day, the man said: “He was indeed slow to respond. He should have apologized as soon as the disaster happened if he truly wanted to show he was acting with sincerity.”

The pleasure boat was lost in stormy seas April 23 with 24 passengers and two crew members during an outing in waters around the scenic Shiretoko Peninsula, a UNESCO World Heritage site in eastern Hokkaido.

At the outset of the news conference, Katsurada apologized for the disaster by prostrating himself on his hands and knees, a gesture regarded in Japan as demonstrating true remorse.

But the father of Nudeshima simply saw the action as “a pose undertaken by the force of circumstances.”

A 73-year-old Shari resident who visited the makeshift morgue set up in a town gymnasium to lay flowers also expressed her disgust.

“His gesture just seemed cosmetic to me,” she said. “If he had put himself in the shoes of the relatives of the deceased, his words and attitude would have been different.”

Yasuhiko Segawa, 64, who has worked in the leisure fishing boat business for more than 30 years in Shari’s Utoro Port, lashed out at Katsurada for allowing the boat, Kazu I, to put out to sea when weather conditions were forecast to worsen with gusting waves and strong winds.

“His approach to safety management does not make any sense,” he said.

Kazu I departed from Utoro Port around 10 a.m. on April 23 for a three-hour tour off the western part of the peninsula so tourists could view spectacular scenery as well as brown bears roaming the coastline and white-tailed eagles flying overhead.

Segawa said boat captains are not supposed to put out to sea when waves are expected to become high because they impede a boat’s progress.

“On the day of the accident, conditions were not good and there were fears the sea would be wind-whipped in the afternoon,” he said. “The only sensible decision would have been to not allow the tour to go ahead, nothing else. His decision was totally unacceptable.”

Katsurada, 58, is fairly new to the boat business. After succeeding his mother’s business to run a hotel and other facilities in Shari in 2014, he purchased Shiretoko Pleasure Boat two years later, saying he did so at the behest of the company owner at the time.

During the news conference, Katsurada said the Kazu I’s captain, Noriyuki Toyoda, 54, used to drive an amphibious bus in Fukushima, Yamanashi and other prefectures after working for a company operating large trucks for many years.

After joining Shiretoko Pleasure Boat, Toyoda was promoted to skipper in a relatively short period, certainly much quicker than it normally takes a crew member.

“I have heard it usually takes three or so years to become a captain,” Katsurada said. “But an experienced captain told me that Toyoda might qualify for skipper status after only a year because he had good sense.”