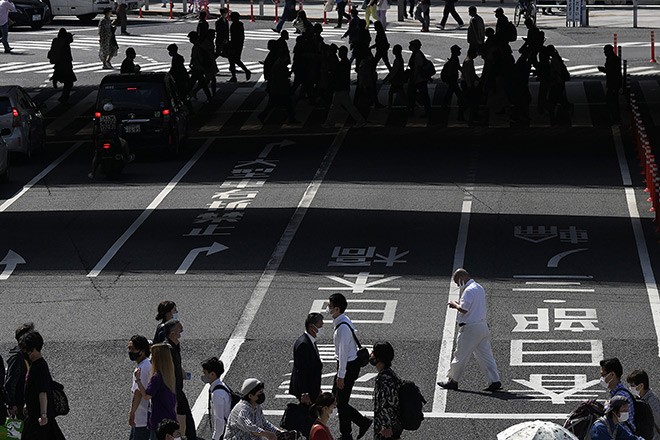 A pedestrian crossing in Tokyo on April 22 (AP Photo)

The Tokyo metropolitan government lowered its COVID-19 status alert from its highest Level 4 to Level 3 on April 28 for the first time in three and a half months as new cases the same day continued on a downward trend.

The daily average of new cases over the week through April 28 in Tokyo came to 5,050.6, or 85.5 percent of the average for the preceding week, metropolitan government officials said.

Four fatalities among patients in their 80s to 90s were also reported in the capital.

Three patients were diagnosed as infected with the novel coronavirus without being tested.

The metropolitan government said it would consider requesting the central government to issue a state of emergency for Tokyo if the occupancy rate of beds for seriously ill patients rose to between 30 and 40 percent.

The Tokyo metropolitan government defines seriously ill patients as those requiring ventilators or ECMO heart-lung bypass machines. Cases in that category numbered 13 on April 28, down two from the previous day.