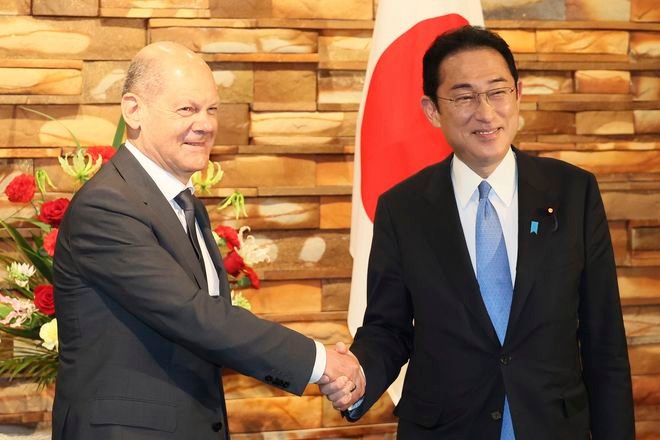 German Chancellor Oraf Scholz, left, shakes hands with Prime Minister Fumio Kishida prior to their meeting at the prime minister's office in Tokyo on April 28. (Pool Photo via AP)

German Chancellor Olaf Scholz said in Tokyo on Thursday that his country wants to strengthen ties with countries in the Indo-Pacific region that share the same values, and work together to end Russia's aggression in Ukraine.

“My trip is a clear political signal that Germany and the European Union will continue and intensify their engagement with the Indo-Pacific region,” Scholz said after meeting Prime Minister Fumio Kishida.

Kishida said he and Scholz agreed that as members of the Group of Seven industrialized nations they share a responsibility to work together to end Russian aggression and restore peace, stability and international order as quickly as possible.

“The Ukraine crisis shakes the foundation of the international order not only in Europe but also in Asia. Any attempts to change the status quo must be avoided, especially in East Asia,” Kishida said at a joint news conference.

“If we do not clearly show (to Russia) that this kind of unilateral change to the status quo by force and recklessness has a high cost, it will give the wrong message to Asia,” he said.

On his first trip to Tokyo as chancellor, Scholz said both Germany and Japan are defenders of the “rules-based international order,” the principles of the U.N. Charter and the defense of universal human rights. Scholz said he also wanted to come to Japan because Tokyo will take over as chair of the G-7 after Germany.

Japan has imposed sanctions against Russia in line with other G-7 countries and provided support for Ukraine out of concern that Russia's invasion could embolden China and intensify tensions in East Asia. China has long sought to take control of independently governed Taiwan, and has threatened to do so by force if necessary.

Japan has also provided Ukraine with non-lethal defense equipment in an exception to its policy against exporting military materials to nations in conflict.

Germany had initially refused to send any offensive weapons to Ukraine and later balked at sending heavy equipment such as armored vehicles.

Scholz's government, under pressure domestically and from allies, recently reversed that policy and agreed to send offensive weapons and allow Ukraine to purchase German armaments, and to support weapons swaps with allies who in turn are sending heavy equipment to Ukraine.

Japan hopes to work closely with Germany as strategic partners on “various challenges that the international community faces, including responses to China,” Kishida said.

Scholz said Germany and Japan also agreed to work together to strengthen economic cooperation in areas such as 5G technologies and economic security.

He said ensuring that supply chains become less dependent on individual countries is “a task that is more relevant than ever,” in a reference to China.