Ex-ballerina to make debut as first geisha trainee in years 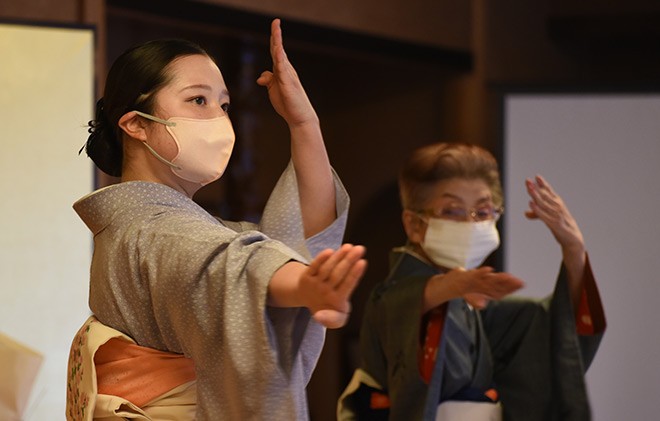 AKITA--A “maiko” apprentice geisha who trained in classical ballet is set to make her official debut in the local geisha community here in late May, making her the first newcomer in four and a half years to finish an arduous training program aimed at reviving geisha culture.

The trainee, who goes by the name Tsukiko, was born to a Japanese father and a Russian mother in Yokosuka, Kanagawa Prefecture.

She started doing rhythmic gymnastics at age 3, and began learning classical ballet when she was 9 years old.

After that, Tsukiko became a trainee at a dance company based in Niigata Prefecture to perform contemporary dance. She had to work two part-time jobs at “izakaya” Japanese-style pubs to earn her keep.

A customer suggested she could train as a maiko to improve her dancing skills and earn more decent money at the same time.

Tsukiko wasn’t interested in the matter at the time, but the suggestion stayd tucked away in her mind.

Later, while working as a dancer attached to a hotel in Iwate Prefecture, she felt an urge to take on a bigger challenge in her life.

Recalling what she was told by the pub customer, Tsukiko attended an explanatory meeting hosted in Akita around June last year by a group called the Akita Maiko project, which is aimed at reviving the geisha culture in this northern city’s Kawabata entertainment district.

“I was inspired by its ambition to produce world’s best maiko,” she said. “It made me feel I wanted to take a shot at being part of this world.”

Having jumped at the opportunity, she started full-scale training last fall, learning classical Japanese dance and tea ceremony. She also intends to master the samisen in the future.

Tsukiko was confident in her dancing abilities, but found it difficult to adjust her style to traditional dance.

The Kawabata geisha community dates back to the Meiji Era (1868-1912). During its heyday in the prewar period, nearly 200 geisha worked here.

Now, only three geisha and one maiko are active.

One of them, Wakayu, 79, who made her debut in Kawabata in 1958, teaches Tsukiko how to dance.

“The geisha community is a form of culture, and I’m happy to see the number of maiko increase,” Wakayu said.

“I want to make patrons feel that my dance and other entertainment skills are remarkably good,” Tsukiko said. “I want to be the kind of maiko who is easy to talk to and approachable.”