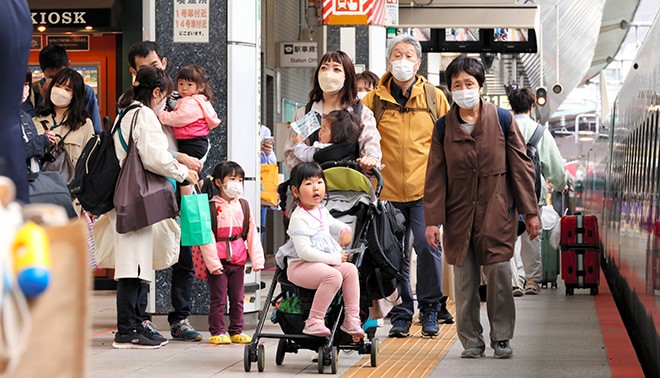 For the first time in three years, long lines of travelers were again the norm at the start of the Golden Week holidays on April 29.

It marked the first time since 2019 that the nation was entering the long holiday period without being under the cloud of a state of emergency or other travel restrictions due to the COVID-19 pandemic.

Long lines of passengers waiting to board bullet trains were seen at JR Tokyo Station from the early morning.

Part of the Tohoku Shinkansen operation was suspended due to a powerful earthquake that struck off the coast of Fukushima Prefecture on March 16, causing a bullet train to derail.

But the operation has resumed on a temporary schedule since April 14.

An 87-year-old woman who lives in Yokohama boarded a Tohoku Shinkansen to see her son in Hakodate, Hokkaido.

She used to visit him once a year before the pandemic. But because of the health-related measures, it was the first time for her to do so in the past three years.

“I am looking forward to seeing the cherry trees fully blossoming there,” she said.

East Japan Railway Co. (JR East) said 710,000 seats of Shinkansen in its jurisdiction have been booked for the period starting from April 28 to May 8.

The figure has more than doubled from the same time the previous year.

The occupancy rate for the outbound Tohoku Shinkansen departing from Tokyo Station was up to 110 percent as of 10 a.m. on April 29.

Central Japan Railway Co. (JR Tokai) said the occupancy rate for the outbound Tokaido Shinkansen had risen to 140 percent as of 10:30 a.m. that day.