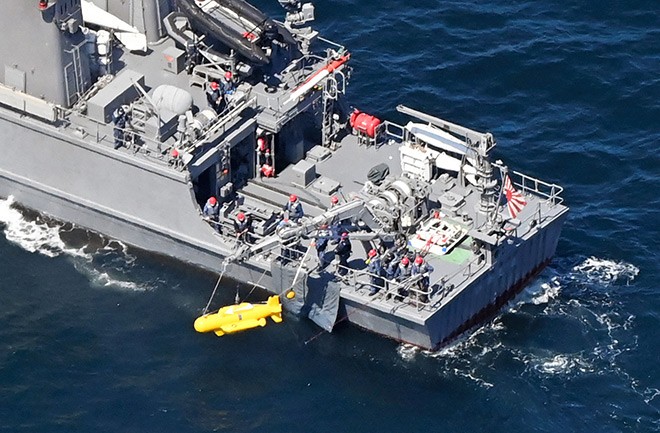 Crew members aboard the Maritime Self-Defense Force vessel Izushima deploy an underwater camera to take footage of the sunken tour boat, Kazu I, off the Kashuni Falls of the Shiretoko Peninsula in Hokkaido on April 30. (Kazuyoshi Sako)

The captain of a sightseeing boat that sank in frigid waters off eastern Hokkaido last month with 25 others on board asked before he set out to be allowed to use his mobile phone for communications, apparently because the satellite phone was out of action, sources said.

He made the request during an official safety inspection carried out three days before the fateful April 23 trip to the scenic Shiretoko Peninsula, and got the go-ahead from the inspector after he assured the official his mobile phone worked at sea.

A check of the boat captain’s mobile phone records at the time the vessel began taking on water in choppy waters and stormy weather showed that it was not in use.

This, the sources said, suggested the skipper was unable to use his device to summon help because he was in an area where mobile connectivity is known to be difficult.

The Japan Coast Guard is still trying to piece together the circumstances that led to the sinking. Fourteen bodies had been recovered as of April 30, and 12 people remain missing.

The transport ministry in its investigation into the disaster is planning to examine whether there were any flaws with the Kazu I’s communication system, according to the sources.

It is set to review the requirements for communication systems on small craft as well as how official inspections are carried out to ensure crew members are able to communicate with shore-based parties in the event of an emergency.

According to the ministry, the Kazu I underwent an annual inspection by the Sapporo branch of the Japan Craft Inspection Organization (JCI) on April 20. The JCI conducts the check on behalf of the ministry.

During the inspection, the captain applied for a change in communications terminals from a satellite phone to his mobile phone, apparently because the satellite phone was on the blink.

A JCI inspector gave the green light to the switch as the captain replied he did not anticipate any problems when using his mobile phone offshore, according to the sources.

Under ministry regulations, the use of a mobile phone for certain craft is permitted on condition it can serve as a 24/7 direct means of contact with shore-based parties.

A map of the communication area produced by the carrier of the captain’s phone showed that it was beyond the service area in most parts of the tour offered by the boat.

The only SOS call from the Kazu I was made by a passenger using a different carrier, according to the sources.

It was likely that the captain’s mobile phone was unable to connect even if he had tried to send an SOS signal himself.

The boat was equipped with ham radio equipment, but his company, Shiretoko Pleasure Boat, could not receive a signal because its antenna was broken.

A man working for a separate tour operator received a ham radio message of distress from the Kazu I and reported the emergency to the authorities, which likely resulted in a delayed response to the unfolding crisis.

In a related development, the Coast Guard and Maritime Self-Defense Force deployed underwater cameras April 30 to see if any bodies were trapped inside the boat, which lies on the seabed at a depth of 120 meters.

A Coast Guard official said the footage captured the open door of the boat’s main rear cabin area, but not much of the interior.