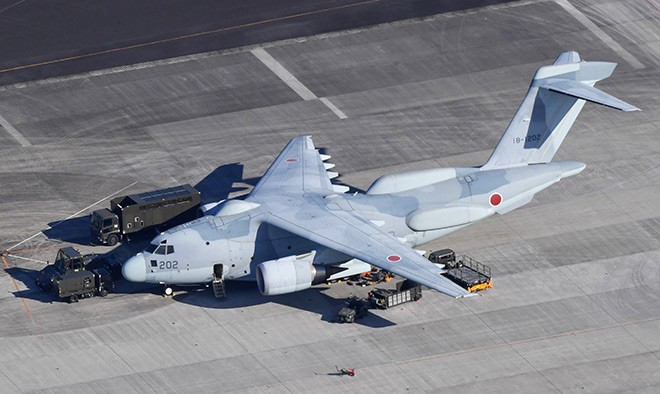 A C-2 transport aircraft of the Air Self-Defense Force at the Iruma Air Base in Sayama, Saitama Prefecture, in January (Asahi Shimbun file photo)

A Self-Defense Forces transport aircraft departed Japan on May 1 to ferry supplies from the United Nations to countries neighboring Ukraine as part of efforts to assist the war-torn country.

The mission, undertaken at the request of the U.N. High Commissioner for Refugees, is meant to underscore Japan’s role in helping Ukraine at a time when other nations have been supplying it with weapons and other military equipment.

The Air SDF’s C-2 transport aircraft took off in the morning from the Iruma Air Base in Sayama, Saitama Prefecture.

The government decided to deploy the aircraft as the mission met conditions for humanitarian aid activity under the law on cooperating with U.N. peacekeeping operations.

The aircraft will make a stopover in Dubai to load blankets and other supplies from a U.N. warehouse that stockpiled emergency goods for delivery to Poland and Romania.

The mission, which will be a weekly event, is expected to continue through the end of June.

“The deployment of the SDF aircraft is intended to show the international community that Japan is doing its utmost to help Ukraine,” a Defense Ministry official said.

Japan has provided bullet-proof vests and other supplies to Ukraine.

Some lawmakers with the ruling Liberal Democratic Party were put out that the Ukrainian government did not include Japan on a list of countries in a video posted on its Twitter account to express gratitude for aid provided to date.

Japan was mentioned in a separate video.

Many Japanese government officials fear that Tokyo’s efforts to help Ukraine are not being recognized by other countries.

During the Gulf War of 1991, Japan drew international criticism for not dispatching SDF personnel to assist the coalition forces.

Government officials are keen to avoid a repeat of that situation by maintaining a high profile in aid efforts toward Ukraine.