Group calls for end to sexual harassment in the film industry 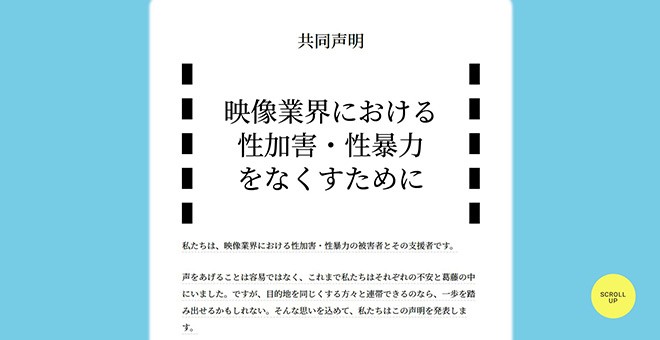 A group of actors who accused film directors of sexual harassment, and their supporters, released a statement calling for measures to eradicate such destructive behavior in the industry.

The move comes as the premiere of the film “Mitsugetsu,” scheduled for March, was canceled after a magazine reported allegations from several actors that the film's director, Hideo Sakaki, had sexually assaulted them in the past.

Ishikawa also indicated that Sakaki had demanded sex with him in return for casting her in his film. Minato, who wrote the script for “Mitsugetsu,” about sexual abuse by a family member, and Hayasaka, who shot the movie, are demanding an explanation from the director.

Sakaki denied the allegations through an agent.

The statement, issued on April 27, noted that film directors and producers take advantage of their position to coerce actors into having sex with them in exchange for casting them in films.

“The coerced are worried about the consequences if they refuse: they may lose the job … And so these victims are forced into silence,” read the statement.

In the statement, the group also called for a need to survey cases of sexual harassment in the sector and set up a third-party organization to address the issue.

The association said those in the entertainment industry may have become accustomed to seeing or hearing about serious cases of sexual harassment and overlooked them, helping those cases remain rife in the sector.

They added they do not want anyone in the industry to fall victim to such violence or suffer in silence.

The statement added that many production crew members also suffer from sexual harassment from their colleagues, which the association attributed to their harsh working environment.

“A poor working environment can be a hotbed for sexual violence and abuse, with perpetrators taking advantage of colleagues who are weakened due to overwork and lack of sleep,” said the statement.

The English version of the statement is available at: (https://harassment-assault-end.info/wp-content/uploads/2022/04/statement_en_web.pdf).

The Motion Picture Producers Association of Japan, which comprises four major Japanese film distributors, pledged to work on eliminating sexual abuse and harassment in the industry, in a statement dated April 26.

The statement was issued in response to a list of proposals on measures to prevent sexual harassment submitted on April 13 by a group of film directors, including award-winning director Hirokazu Kore-eda.

In the statement, the association said violence and harassment of any kind should never be tolerated.

The association has been working with the Ministry of Economy, Trade and Industry since 2019 to improve the working environment in the sector.

In the statement, the association also expressed its intention to draft guidelines on measures to prevent harassment and address other issues in the workplace by referring to proposals from directors.

(This article was written by Takuji Hosomi and Misuzu Sato.)