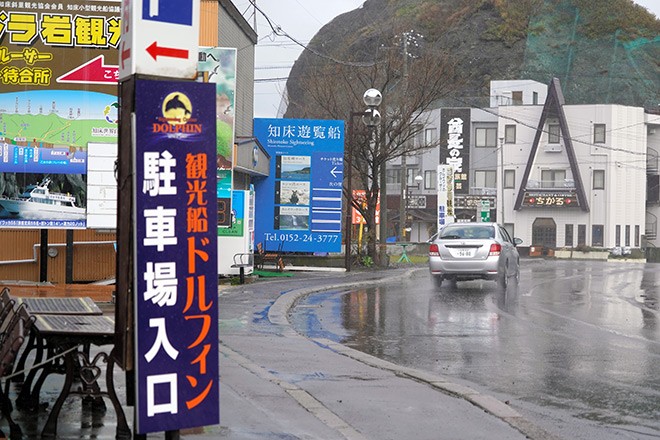 The tourist hub of the Utoro district in Shari, Hokkaido Prefecture, is almost empty on May 2. (Shigetaka Kodama)

SHARI, Hokkaido--Local officials here are concerned the tragic tour boat sinking could deal a blow to the local tourism industry already struggling with fewer visitors amid the pandemic.

“We have relied on boat tour participants for revenue,” said a worker at the Shari Kobo Shiretoko-ya souvenir shop on April 29.

The boat sank with 26 people on board on April 23 after it left a port here for a sightseeing tour of the Shiretoko Peninsula in eastern Hokkaido.

“It is hard to tell to what extent the boat disaster could affect the arrival of visitors during the holidays,” the worker said.

The peninsula, a World Natural Heritage site, is one of the most popular destinations in the nation for nature lovers seeking a majestic view of the rugged landscape, as well as wildlife.

In the wake of the tragedy, small boat operators have decided to stop offering tours during the Golden Week national holidays, rattling shops counting on tour participants.

The souvenir shop is about 30 kilometers from the Utoro fishing port of Shari from which the Kazu I vessel departed. Shari is a hub for sightseeing tours in the Shiretoko Peninsula.

The man said visitors by noon of April 29, the first day of the holidays, were “slightly fewer than expected.”

Golden Week is the busiest season, excluding the Bon festival in summer, he said. Families visit his shop to buy salmon products.

On some days, daily sales used to hit three times the daily average of a year.

Many of the shop’s customers come to the town with a boat tour of the peninsula as the main purpose of their stay, the worker said.

About 64,000 tourists visited Shari before the pandemic struck in May 2019, including those who traveled to the town from late April during Golden Week, according to a report by the Hokkaido prefectural government.

That dwindled to about 18,000 visitors during the same period last year.

But tourists were slowly returning this year.

At the souvenir shop, sales returned to 70 percent of what was seen during the pre-pandemic days.

And then the tragedy of the Kazu I occurred.

The operator of Shiretoko no Yado Lantan, a hotel in Shari, saw a drop in guests since the public health crisis, though their rooms had been fully booked during Golden Week each year prior.

The situation improved this year, with 80 percent of the rooms booked during the holidays.

“I am confident customers are coming back,” said Takeshi Onodera, president of the company operating the hotel.

He is now recommending a trekking tour of five lakes in the peninsula, rather than a boat tour.

“After the disaster, it is difficult to suggest a boat tour,” he said.

Some tourists have changed their plans to stay in Shari after canceling a boat tour of the peninsula, according to Shiretoko Tourist Co.

“Tourists have come to the town to enjoy both nature tour and a boat tour,” said Tomio Ishida, president of the tour company. “I am concerned fewer people may stay overnight in Shari.”