Tsutenkaku Tower slide in Osaka the site of media screamfest 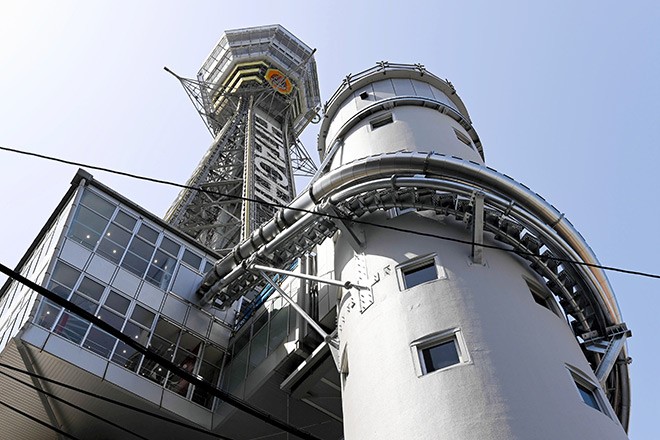 The slide starts on the third floor of Tsutenkaku Tower in Osaka. (Nobuhiro Shirai)

OSAKA—A 60-meter-long slide attached to the landmark Tsutenkaku Tower here offers users a stunning view of the city while they shriek in terror.

The new attraction in the Shinsekai district of Osaka’s Naniwa Ward was opened on April 28 to media reporters, who hurtled down the slide on their backs.

The ride begins on the third floor of the tower, 22 meters above ground, swirls around the elevator building of the tower, and ends after about 10 seconds at the first basement floor.

Although a safety tube surrounding the slide certainly prevents riders from flying out, screaming appears to be an inevitable part of the experience.

Part of the spiral tube is transparent so that users can see the city during their descent.

The slide’s incline is about 30 degrees, an angle that stunned even the operator of the slide.

“I was surprised that the incline is steeper than expected,” said Ryuko Takai, president of Tsutenkaku Tourism Co. “We want not only domestic tourists to enjoy the new Tsutenkaku Tower but also inbound visitors who can feel the city rather than just read about it.”

The slide will open to the public on May 9. It is expected to lead to a rebound in visitor numbers to the tower, which have plummeted during the COVID-19 pandemic.