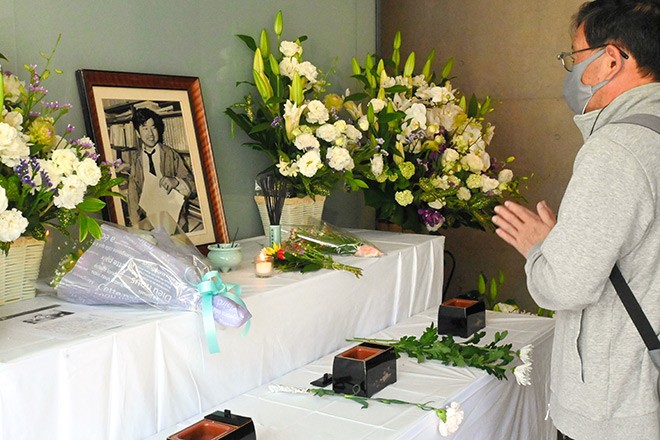 A visitor prays before a portrait of Tomohiro Kojiri at The Asahi Shimbun’s Hanshin Bureau in Nishinomiya, Hyogo Prefecture, on May 3, 2021. (Asahi Shimbun file photo)

Hiroaki Taniguchi will visit The Asahi Shimbun’s Hanshin Bureau in Nishinomiya, Hyogo Prefecture, on May 3, as he did last year.

Taniguchi, 51, is director of the mayor’s office at the Nishinomiya municipal government. He is also an accomplished pianist who has won prizes in competitions, both at home and overseas.

On May 3, 1987, a masked gunman stormed the bureau and opened fire with a shotgun, killing Asahi Shimbun reporter Tomohiro Kojiri, who was 29, and seriously injuring a colleague, Hyoe Inukai. The latter died of unrelated causes in 2018.

A group calling itself “Sekihotai” claimed responsibility for the attack, accusing The Asahi Shimbun in a statement of having a “han-nichi” (anti-Japanese) editorial slant.

“I want to know more about the attempt to suppress freedom of expression with violence, which took place near the city hall,” Taniguchi said.

As a musician, Taniguchi has given full rein to expressing himself in public forums over many years, although his field of activities are different from that of a reporter.

By 2003, the statute of limitations had run out for the series of attacks against The Asahi Shimbun claimed by the obscure group.

Its despicable acts aimed at muzzling free speech and expression can never be forgiven, no matter how much time passes.

The current global outlook strengthens our sense that this view needs to be shared with people across the world.

In Russia, now locked in military aggression against Ukraine, the government is tightening its control of the media to block news reports critical of the Kremlin. A law has been enacted that allows the government to impose maximum prison terms of 15 years for spreading “fake news.”

In Hong Kong, a newspaper known for its critical stance toward the Chinese government was forced to shut down under a contentious national security law enforced by Beijing.

In Myanmar, which is under military rule, freedom of speech remains similarly suppressed.

In the case of Russia, it is important to note that the government’s crackdown on free speech got under way before the war started and a state of emergency was declared. The fact is that freedom of speech had been gradually reduced to create an environment supportive of the invasion of a neighboring country.

This underscores the importance of remaining vigilant against abuses of power by the authorities and speaking up when questionable actions occur.

To remain silent in the face of attacks on free speech, rationalizing it is not a big deal or dismissing them as someone else’s problem, carries the risk of allowing society to go beyond the point of no return. This is an important lesson of history.

Japan is by no means immune to this risk.

Three years ago, two protesters were removed and harassed by police officers while heckling the prime minister, Shinzo Abe, while he was stumping in Sapporo on behalf of a candidate from the ruling Liberal Democratic Party running in the Upper House election.

In March, the Sapporo District Court ordered the Hokkaido authorities to pay compensation to the two residents who had separately filed lawsuits, ruling that the authorities infringed on the plaintiffs’ basic human rights.

The court decision reaffirmed that freedom of expression is a vital right that lies at the heart of democracy. It also served as a warning against excessive behavior by the police.

The trial likely made many Japanese strongly aware of the need to maintain the health of society by responding to any incident that could threaten free speech.

In claiming responsibility for the attacks against The Asahi Shimbun, Sekihotai said, “The anti-Japanese Asahi must return to what it was 50 years ago.”

Our answer to the demand is, of course, a flat “no.”

We will not allow Japan to return to the dark age of restricted speech. While the war in Ukraine grinds on, we pledge afresh our commitment to the freedom of speech on May 3, which is Constitution Day.