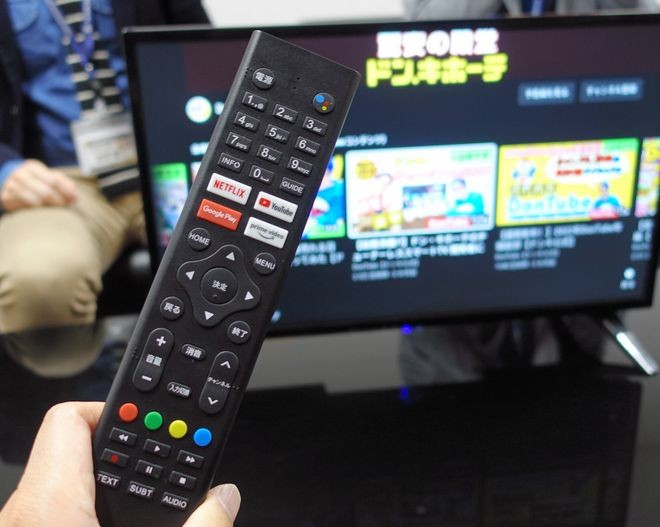 A remote controller for the Tunerless Smart TV released by Don Quijote, seen here in Tachikawa, western Tokyo, in March, has buttons for launching Netflix and YouTube. (Hiroki Ito)

A low-price smart TV designed specifically to not receive conventional broadcasts has become a smash hit in recent months with customers who do not watch traditional TV broadcasts.

A wider use of such TVs exclusively for online services could become a thorn in the side for Japan Broadcasting Corp. (NHK).

The Don Quijote discount store chain has already almost sold out of its in-house brand of Tunerless Smart TVs after rolling out 12,000 units.

The brisk sales come as a growing number of people are opting to view programs and videos over the internet instead of through broadcast television.

The new gadget is drawing attention in part because owners can avoid the fees NHK collects from households with conventional TVs installed.

At a busy Don Quijote store in Tokyo on a recent day, only one 24-inch model of the TV remained available for purchase. It was billed as something that can run apps like a smartphone and “looks like a TV but isn’t.”

The flat-screen TV has Full HD resolution and is light enough to be easily carried around.

The bigger 42-inch model was already completely sold out.

Don Quijote released the product in the two models in December.

Three thousand units of each sold out in about a month. Another 3,000 units each were put on sale in February, but few are left, so eager buyers will have to wait for the next batch.

The product uses Android TV, an operating system by Google LLC. Speaking directly to its intended use, the remote control has buttons that launch the major video streaming service Netflix and the popular video-sharing website YouTube.

The product was created by Yoshiyuki Karasawa, a member of the private brand planning and development department with Pan Pacific International Holdings Corp., which operates the Don Quijote chain, who sensed a need for it in his own personal life.

Karasawa, 46, said he is a big fan of TV dramas but he watches them mostly through streaming services, such as TVer (pronounced tee-ver), a streaming platform operated by commercial TV channels. He said he never watches broadcasts in real time.

But all TV set products available from major manufacturers in Japan are equipped with both a tuner and an operating system for going online.

“I thought that we could offer a cheaper alternative without a tuner,” Karasawa said.

He proposed a similar product in spring 2019, but the project had a rough start, partly because Google was slow in consenting to the use of its operating system. But he managed to have the product finished in time for the most recent end-of-year sales battle.

It was an instant hit. The company’s call center even received calls thanking them for releasing the product.

Many of the people who bought one are in their 20s through 40s, according to the company.

It is now weighing plans to make an even larger screen size, after it received a spate of requests.

Karasawa said he is “so happy” that consumers have embraced his product, inspired by his own lifestyle of never watching conventional TV broadcasts.

Its success comes as an increasing number of people use their TVs to watch videos streamed online instead of traditional broadcast television.

The Annual Media Consumption Survey released in 2021 by Hakuhodo DY Media Partners Inc.’s Institute of Media Environment shows that 46.6 percent of respondents in Tokyo use subscription video streaming services, such as Netflix. That is about five times more than five years ago.

In addition, 15.3 percent of respondents also included time for watching catch-up TV services, such as TVer.

“Total media exposure time has increased because of more hours being spent at home under the coronavirus pandemic,” said Taeko Niimi, a senior researcher with the Institute of Media Environment. “That has, in our view, changed the way people watch TV and has accelerated the trend of viewing videos through online streaming services and connecting to the internet through smart TVs.”

But consumers changing the channel away from conventional TV with such a product poses a potential threat to the finances of Japan’s public broadcaster.

A passage from Japan’s Broadcast Law lays out that “persons installing reception equipment capable of receiving NHK broadcasts must conclude a contract with NHK for the reception of those broadcasts.”

NHK public relations officials told The Asahi Shimbun that they consider a tuner-less TV to be equipment without features for receiving NHK broadcasts.

“Such a product does not amount to ‘equipment capable of receiving NHK broadcasts,’ so (its installers) do not have to conclude a viewing contract,” the officials said.

NHK officials said they are “not in a position to take a stance” on Don Quijote’s product specifically.

Don Quijote does not emphasize that an owner does not have to pay NHK subscription fees but instead says the product “looks like a TV but isn’t one.”